Podiums for Adam Hall and Corey Peters at Season Opener

Aspen, USA (10 December 2014) - NZ Paralympians Adam Hall and Corey Peters have charged back in to competition mode, both earning podium spots today at their first races since the Sochi Games. New Zealand’s top adaptive ski racers are in Aspen, USA for the IPC Alpine Skiing NorAm Cup, the first high-level races of the 2014-15 para-alpine ski season.

“It’s good to get back into the race action and come away with the results,” commented Adam who specialises in the Slalom discipline which featured on today’s race schedule.

However, after a nine month gap since his last competition and faced with a technically challenging course for the first run Adam wasn’t taking anything for granted. “I knew it wouldn’t be easy,” he explains.

The first run saw tight racing with only a few tenths of a second separating the top three and Adam placed third. With the faster second course set playing more to his strengths he was able to put the hammers down and come away with a convincing win in the men’s standing class. Canada’s Matt Hallet placed second and American Ralph Green third.

Corey Peters, who competes in the sitting class, was also pleased to be back on the race course. While the technical Slalom discipline hasn’t yet become his strength a focused training block in NZ looks to be paying off with Corey claiming third place in today’s race.

“We’ve been working hard in training, making some big improvements and minimising the mistakes. I’m definitely closing the gap to first place,” he explains. Tyler Walker of the US posted the day’s fastest time with Jasmin Banbur, also of the US, in second place. 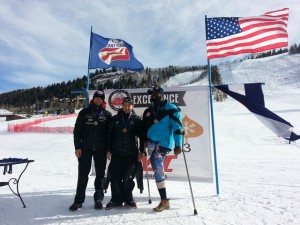