Podium Dream for Christy Prior at Dew Tour

Breckenridge, USA (13 December 2014) - New Zealand snowboarder Christy Prior (Kaukapakapa) has landed one of the strongest results of her career so far finishing third in slopestyle at The Dew Tour in Breckenridge, U.S.A today.

“The podium still feels like a dream,” commented Christy after the event. “Coming in to the competition I was just hanging to get into the finals so today I was just focused on doing the tricks I know I can do as cleanly as possible.”

After a tense qualifying round earlier in the week in which Christy earned the sixth and last spot into the finals in the last chance qualifying round, today’s finals competition would be another test of her nerve. The field of six competitors included the best in the world with Olympic gold medallist Jamie Anderson (USA) and Olympic silver medallist Enni Rukajarvi (Finland) setting the standard with first run scores of 96.25 and 93.25 respectively.

Christy’s top score of 90.00, which would see her finish in third place, would hinge on a trick she hadn’t landed in competition for sixth months.

“Christy had been nailing her tricks all week in training,” explains coach Bud Keene. “We decided to change out one of the tricks to the inverted 360 ‘wildcat’ which is just a little more spectacular. She didn’t land it in practice but we know it’s a trick she has on lock and it would come down to Christy having the confidence to put it down when it counted in competition.”

“It’s not my most technical trick but the wildcat was a bit of a hurdle for me and today was about getting my confidence back,” explains Christy.

Keeping her nerves in check, Christy landed the elusive ‘wildcat’ on the first jump of her first run and put down the clean run she had been looking for, earning her place on the podium.

“Other top competitors have been taking note of Christy’s skills for a while now,” says her coach Bud Keene, who has also coached two time Olympic snowboard gold medallist Shaun White. “She has been working on her craft and honing her approach to competition. With today’s result she is certainly putting others on notice that things are really starting to come together.”

Other members of the Cardrona NZ park and pipe team also in action today were Wanaka freeskiers Janina Kuzma, Byron Wells and Beau-James Wells, all competing in the superpipe.

After a fourth place finish in semi-finals earlier in the week and following on from her recent world cup win, Janina came into today’s finals gunning for a podium. She scored a solid 81.50 in her first run which initially put her into third place and from there the see-sawing would begin.

Swiss skier Virginie Faivre upped the ante with a score of 83.00 pushing Janina into fourth. The Kiwi rose to the challenge, increasing amplitude and refining the execution of her tricks for a second run of 85.00 to claim back third place, but only temporarily. Olympic silver medallist Ayana Onozuka (Japan) then came through with 85.75 claiming third place and leaving Janina just short of the podium in fourth place on final standings.

In the men’s freeski supersipe semi-finals Byron and Beau-James Wells were disappointed to miss out on qualifying for the finals, both struggling to land clean competition runs despite a successful week of training.

“We’re seeing some really amazing skiing and the level is just getting insane,” said coach Bruce Wells. “You’ve got to be consistent to get results and getting through to finals means putting down an almost perfect run every time. Both Byron and Beau struggled with their last tricks today.”

The competition format allowed each skier two runs to earn their best score before the top ten progressed to finals. The next ten then had the opportunity to earn the two remaining finals spots through a last-chance-qualifier round. Placed thirteenth after the first two runs, Byron progressed to the LCQ round but couldn’t quite execute the run he wanted, skidding out on left 10 trick and losing valuable points. He finished 13th overall. Beau-James finished 23rd overall.

Jackson Wells also had his first Dew Tour experience this week, taking on the men’s freeski slopestyle semi-finals yesterday. Taking an ‘all or nothing approach’ Jackson attempted a triple 1080, a cutting edge trick which was first landed in competition just three months ago by Swiss skier Luca Schuler. The young Kiwi has previously landed the trick in training but couldn’t hold it together for a top score in today’s competition and finished in 19th place. 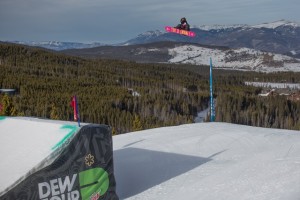 6 years ago
Christy Prior, The Dew Tour