84 men and 53 women representing 19 countries competed on the Outwide Course in the Rocky Gully Race Arena. The first run was held in demanding overcast conditions but the weather was clear and calm for the second.

FIS ANC chairman David Howden paid tribute to the Coronet Peak race crew for the course preparation which resulted in an excellent competition.

“Initially rain was forecast which fortunately never came and while the first run was held in misty conditions at the start by the second run it was a fine day. The race crew worked hard and put a lot of salt down on the course so it held up very well.”

He said it was good to see such a top-class field at the ANC slalom in a year which did not precede a Winter Olympic Games.

“While there are a lot of highly ranked internationals racing it is pleasing also to see New Zealand athletes coming through and making an impression.”

In the women’s slalom 35 athletes completed the race and it was a clean sweep of medals for the Austrians who were dominant from the outset. Truppe, ranked 34th in the world, was second fastest in the first run in 41.54 but clocked the fastest time in the second of 44.06 to record 125.06. She was chased by team mates world number 53 Ricarda Haaser, who crossed the line in 1.26.07, and Elisabeth Kappaurer, ranked 88th, close on her heels in 1.26.59 to take silver and bronze placings respectively.

The fastest first run was put down by Katarina Gallhubber, also from Austria, in 41.42 but she failed to finish the second run and was out of contention.

Truppe, who is currently training in the region with the Austrian team, was excited about her win.

“I found the course tough and the snow conditions quite difficult but am very happy to win the gold medal.”

The first New Zealand woman was number one ranked 19-year-old Piera Hudson of Hawkes Bay who finished 17th in 1.30.26.

The men’s race had a high attrition rate with just 45 finishers. It was hotly contested with Winter Games NZ favourite and world number 31, Adam Zampa, taking the title after putting in the fastest first run of 39.17 and the second-fastest second run in 41.75 for a combined time of 1.20.19. The Slovakian was wearing the yellow bib after winning it at the recent ANC slalom races in Perisher, Australia.

He was jubilant about the result: “I love it here at Coronet Peak. I won the GS title at Winter Games NZ 2013 and it was great to get the slalom title today.”

Silver medallist Marco Schwarz of Austria, ranked 41 in slalom, put the pressure on Zampa with the fastest second run of 41.07 but his combined time of 1.21.48 was not enough to topple the leader. Marc Gini of Switzerland, with a world slalom ranking of 56, won the bronze medal in 1.21.73.

New Zealand Sochi Olympian Adam Barwood of Queenstown put in a solid performance to finish 13th in the elite field in 1.23.10.

FIS Secretary General Sarah Lewis, who arrived in Queenstown from Geneva yesterday, attended the racing and was impressed with the quality of the field.

“There is always a good tradition in New Zealand for ANC races and to see so many top 100 skiers here is quite unprecedented.”

Lewis said her visit to the Audi quattro Winter Games NZ was an endorsement by FIS of the international standing of the Games.

“It reinforces the important role of the Games on the world calendar and highlights the excellent facilities and infrastructure that have been developed here. If the partners of Winter Games NZ are ready for the event to become an annual one then the athletes certainly have the appetite for it because they can then lock it into their schedules on a long term basis.” 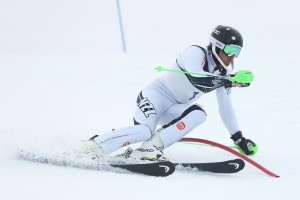