PBs for Nick Prebble in Canada

Panorama, Canada (21 December 2014) – NZ alpine ski racers have closed out their 2014 race schedule with an intensive week at the Panorama NorAms in Canada. Nick Prebble led the charge amongst the Kiwi men achieving personal best results in Super-G and Giant Slalom against maximum capacity fields of 140 athletes.

The Panorama NorAms began on 14 December with the Super-G. Nick explains how the race unfolded for him:

“The race had to be shortened because of limited snow so it was an all out sprint Super-G and if you wanted to be fast you had to be really aggressive. More time is needed on my speed skis to really develop the speed and to be confident to snap off turns. However, each day got better for me and I was really happy to achieve a PB Super-G result!”

“I have made some strong changes in my skiing and have bounced back from a very disappointing southern hemisphere season. The first day I skied well to move up into 16th on the first run but over skied the second run to finish 17th. The second race I was out to add more speed to my ‘solid’ skiing. First run I made mistakes but was feeling positive that I had sections of faster speed. In the second run I went all out and am super stoked everything connected for me on the run. I was leading at the split and ended up second on the run to move into eighth and score a PB 16 point result. It is a great feeling to get such a good result and I am just really happy I was able to connect it all together on my second run.”

Adam Barwood recorded a DNF on day one of the GS “but took a much more aggressive line on day two and managed to move up to 17th position.” Willis Feasey finished 38th on day one, also improving his position on day two, moving up to 27th place.

Amongst the female field Piera Hudson also recorded strong results in the Super G and Giant Slalom which will help to improve her world rankings. On the first day of Super G on 15th December Piera placed 13th 1.76secs off the leader Valerie Grenier of Canada. The following day she finished 15th from 90 racers, 1.35secs behind winner Mikaela Tommy of Canada.

Piera carried her form through to the Giant Slalom, finishing 14th from a field of 105. She was particularly pleased with the result given the fact that she had sustained an injury to her thumb from a fall in training the previous day. 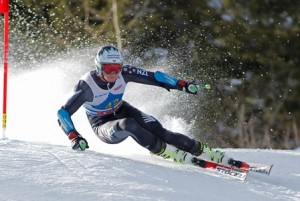