New Zealand winter Paralympians Corey Peters (sit-ski) and Carl Murphy (para-snowboard) were on hand at Turoa ski field last month as part of a mentoring and coaching camp for adaptive snow sports athletes looking to hone their skills and learn more about the Paralympic pathway.

The three-day camp, held at Turoa ski field from 29-31 August, was part of the Snow Sports Youth and Women Talent Identification Programme. The programme is delivered by Snow Sports NZ and supported by the Agitos Foundation and Paralympics New Zealand. The Agitos Foundation is the leading global organisation developing sport activities for people with an impairment as a tool for changing lives.

The camp attracted seven participants aged between 13 and 22 years and included skiers and snowboarders with a range of disabilities.  As the national sporting organisation representing the interests of adaptive snowsports, Snow Sports NZ’s mandate is to lead and support the success of competitive snow sports in New Zealand. The aim of the Turoa camp, therefore, was to identify and support emerging talent with a particular focus on women and youth.

Camp participants were treated to three consecutive days of fine weather at Turoa for their on snow training. The schedule also included coaching in other key areas of high performance sport such as nutrition and mental skills.

Corey Peters talked to camp participants about his experiences at the 2014 Paralympic Winter Games in Sochi where he won the silver medal in the Giant Slalom.

As well as developing their skills, the athletes were classified for competition. Using the International Paralympic Committee (IPC) classification system athletes are grouped according to their functional ability, with factored timing allowing those with different impairments to compete against each other. The camp was also an opportunity for coaches of able-bodied snow sports athletes to extend their skill set and develop an awareness of the capabilities of adaptive athletes.

”I’m delighted with how well the camp went,” said Snow Sports NZ Adaptive Manager, Jane Stevens. “We’ve seen some real potential in a couple of these athletes and we’re very excited to see them starting out on their competitive pathway. Having Carl and Corey here as part of the coaching and mentoring team has been an invaluable part of the experience for these up and coming athletes. I’m sure it’s inspired them to push themselves as well as giving them some good insight into what it takes to achieve at the top level.

“A huge thanks to the Agitos Foundation and Paralympics New Zealand for supporting these camps. New Zealand has a long and proud history of success at the Paralympic Winter Games and it’s camps like this which enable us to identify and support athletes and ensure that we continue to perform well on the world stage.” 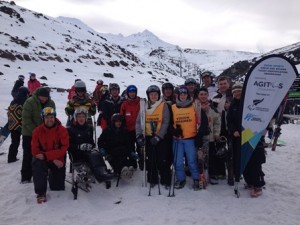