Hall said: ”It has been 8 years since Vancouver and I’m still in shock, pretty emotional. It was a great comeback after the first run. A couple of mistakes in the Super G but we knew we were in the hunt. I just had to go out in the slalom like I know I can and we got the reward. I’ll take any colour [medal]! To come from 7th, into first for a little bit and then hang on and jump into third is remarkable. It sets me up well going into the Slalom on Saturday. We’ll take this with both hands for sure.”

When Hall was asked what it was like to have so many of his family supporting him from the stands he said: “It is amazing. Elitsa my wife is here, my sister in law, uncle and aunty but I also have a lot of family supporting me back home. My Dad and his partner, my sister, niece, my nephew, brother in law, everyone is rooting just as hard from back home. I appreciate their support just as much as everyone that is here. All of the support has helped me get down the mountain that extra 10ths and 100ths of a second faster.”

Super combined is a long challenging event to be able to keep focussed is key. This is a credit to everyone around me that, doing their jobs so well. We’ll look forward to tomorrow with Corey getting out here with the Giant Slalom and carry the momentum and get another colour.

To win a medal in the Super Combined, you must set a combined fastest time across run 1 (Super-G) and run 2 (Slalom). Hall gave a fantastic performance in his first run of the Men’s Super Combined earlier this afternoon, setting the 7th fastest time overall amongst a field of 32 Para skiers in the Super-G. Several big names went out amongst the 11 DNFs, including Super Combined world no 1 Markus Salcher of Austria and world no 2 Robin Cuche of Switzerland. Theo Gmur, who won the gold in the Men’s Downhill Standing event contested by Hall on Saturday, was also an early casualty.

Fast forward to the second run, the Men’s Slalom Standing and Hall set a very quick combined time of 2:15.32, to take the fastest overall time. He held this for several more competitors before slipping down into silver and then finally bronze, 4.76s behind the gold medallist Aleksei Bugaev, a Neutral Paralympic Athlete. Arthur Bauchet of France finished in silver medal position after being fastest in the first run of the Super-G, earlier today. 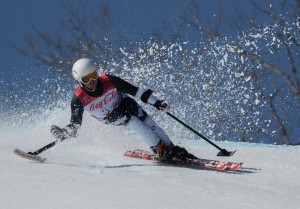