Welcome to Snow Sports NZ / News / Para Snowboarder Carl Murphy Delivers Performance of his Life, to Nearly Cause a Major Upset in PyeongChang

Para Snowboarder Carl Murphy Delivers Performance of his Life, to Nearly Cause a Major Upset in PyeongChang

Carl Murphy today delivered what is being hailed as one of the best races of the day at Jeongseon Alpine Centre at the PyeongChang 2018 Paralympic Winter Games. Murphy went head-to-hard with reigning world number 1, Finish rider Matti Suur-Hamari, in the quarter finals of the Men’s Snowboard Cross SB-LL2. He lost in the sudden death competition only after an exceptionally hard-fought race that very nearly saw him cause a major upset. Suur-Hamari went on to win gold, ahead of Keith Gabel  of USA in silver and Gurimu Narita of Japan in bronze.

Earlier, Murphy had set a first round qualifying time of 1:00.08 in the Men’s Snowboard Cross, the 5th fastest time out of 20 riders and only 1.87s adrift of the fastest qualifier. His second slower time of 1:06.15 came after a short slide in second qualifying, yet he still easily qualified 7th fastest for the heats.

Entering the Top 16 shoot-out, Murphy was drawn first against Alex Massie of Canada. Massie, who is ranked 5th in the world ahead of Murphy in 7th, qualified 10th behind Murphy. A heart-stopping race followed; Murphy got away from the gates first, but Massie passed him at the top of the run. Murphy’s fighting attitude took him back in the lead twice before it stuck, advancing Murphy to the quarter finals.

Drawing Suur-Hamari for the quarters must have been daunting, but the kiwi simply refused to give up, putting major pressure on the Finn from the very beginning and even taking the lead twice, before crossing the line less than a half a second adrift. Suur-Hamari immediately rushed to shake Murphy’s hand, as the crowd went wild and his kiwi supporters watched on in tears of pride at his performance.

Murphy said: “Matti Suur-Hamari is world number one and we had a little bit of a battle going there, unfortunately I could not quite make it stick at the finish line. I’m gutted to be knocked out in the quarter finals but it was always going to be tough lining up against Matti.”

He continued: “I’ve been struggling with my starts all season as this is my first time riding Snowboard Cross for two years so been playing catch up. Throughout the season we have done a lot of training on passing and body contact so I was fully aware that chances were I was going to be behind from the start and I just had to be patient and wait for the passing opportunities which I did. But it just didn’t quite make that last run work. So it is a couple of days of recovery for me and Banked Slalom on Friday.”

When Murphy was told that New Zealanders were going crazy following the racing and commenting on social media he said: “I just hope everyone enjoyed the show and seeing some of these disabled boys and girls throw it down on the Snowboard Cross course, it’s pretty insane.”

While Murphy was giving it his all his four proudest supporters were on the edge of their seats. His three young children and wife Aleisha cheered on from Wanaka. Aleisha said: “We couldn’t be prouder of you Carl. That racing was outstanding. We were shouting at the TV and I’m sure the whole neighbourhood heard us. Be proud, you gave it 150%.”

Today’s result is an exceptional one for 39 year old. Since placing 4th in Men’s Snowboard Cross on his debut at the Sochi 2014 Paralympic Winter Games, the single below knee amputee has had problems with his fully able leg, resulting in surgery and a long fight back to the top of his sport. A recent bronze in Men’s Snowboard Banked Slalom at the World Para Snowboard Cup in Canada will have bolstered his confidence, especially with this event still ahead in PyeongChang.

Image: Carl Murphy competes against Canada's Alex Massie in the 1/8 SBX Final at the 2018 Paralympic Winter Games in PyeongChang. 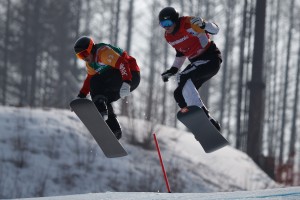