Formerly known as The North Face® Freeski Open of NZ, the event was renamed The North Face® Frontier in 2016 to reflect its mission to provide both skiers and snowboarders with a top level freeride competition and help upcoming riders reach their goal of qualifying for the prestigious Freeride World Tour.

Organisers, Snow Sports NZ are delighted to have The North Face® once again as title sponsors of the event.

“The North Face® are long term supporters of our event and we love welcoming them back to be part of the action every year,” says Snow Sports NZ Director of Sport Development, Adam Dooney. “Without their support we wouldn’t be able to put together such a high level event and we’re extremely grateful to have such an enthusiastic and committed title sponsor. We look forward to seeing Steve Winnacott and his team out on Alta Lake again this year, cheering on the athletes as they cross the finish line.”

Entries for both the two-star and four-star events are tracking well and a strong international field of skiers and snowboarders will once again push their riding to the limits on the outstanding terrain at The Remarkables Ski Field.

The 2015 men’s ski podium place getters, Sebastien Varlet (FRA), Sam Lee (NZ) and Hank Bilous (NZ), have already thrown their hats in the ring and will be looking for strong early season results. Lee is the latest in an impressive list of Kiwi freeride athletes to qualify for the World Tour, his second place finish at The Remarkables in 2015 giving him the step up he needed to take his ski career to the next level.

Fresh snow falls at The Remarkables over the past week have both venues – Shadow Basin for the two-star and Alta Chutes for the four-star – primed for competition and thanks to sponsorship from Torpedo7 and support from Destination Queenstown, viewers all around the world will be able to watch the action unfold. The four-star ski and snowboard events will be livestreamed for the first time.

“We’re excited to see the next evolution of an event that has been a mainstay of freeriding in New Zealand for the past decade. The inclusion of snowboarding last year further adds to its appeal and the chance to assist in bringing the live streaming piece to those that can’t be there in person is an opportunity we couldn’t pass up,” says James Mulcahy, Sponsorship Manager for Torpedo7. “We’re passionate and driven in our desire to see Kiwis engage with the great outdoors. “See You Out There” is more than just a tagline for us and we can’t wait to see it all go down at the Remarkables this coming August.”

For over a decade The Freeski Open of NZ was known and loved for its unique combination of extreme sport and relaxed, social vibe. The North Face Frontier aims to take both elements to a new level and, as such, is excited to welcome Champagne Mumm as sponsor of the official after-party.

Once competition wraps up on snow on 27 August, competitors, supporters and snow enthusiasts will celebrate in style at Toro Kitchen and Bar in downtown Queenstown, hosted by Champagne Mumm.

“For over 180 years, Champagne Mumm has been an icon of victory and so we’re thrilled to be the Official Champagne of The North Face Frontier. Champagne Mumm has become synonymous with moments of celebration and we look forward to bringing our ‘Dare Win Celebrate’ state of mind to The North Face Frontier after-party. From guests enjoying a flute from the impressive 6 litre Methuselah bottle of Mumm Cordon Rouge, to the innovative ritual of Skibrage, it will be a night to remember,” says Sassetta Andrew, NZ Brand Manager Champagne Mumm.

The North Face® Frontier website, Facebook page and Instagram account will be the places to go for further information before and during the event including competitor lists, results, photos, video edits, how and where to watch the livestream and, of course the Mumm Champagne after-party. 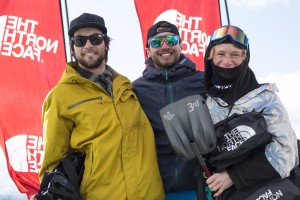 6 years ago
The North Face Frontier