Lake Wanaka, NZ – (3 October 2013) –The Bonfire Snowboard Halfpipe and K2 Big Mountain competition were the order of the day at Cardona Alpine Resort today. The events are part of the Snow Sports NZ 2013 Freeski & Snowboard Junior Nationals which has attracted more than 200 entries from competitors aged between three and eighteen years.

Today was the turn of the young snowboarders to compete in the Olympic Super-Pipe.  At 22ft high, 21m wide and 160m long the pipe provided a test of courage as much as skill for the youngest riders, some as young as five. Head Judge, Mike Hygemann, was keen to stress to the youngest competitors that they were not expected to reach the top of the pipe but would be awarded points for showing effort and getting as far up the walls as possible.

Competitors had two attempts to impress the judges with their tricks and the better of two runs counted as their overall score.

Amarnie Barber and Campbell Melville Ives have been at home on the podium all week and once again topped their Ruggies age group along with Charlotte Lyell and Valentino Guseli in Grommets. Ripper girl Cool Wakashimu finished off her week of competition with two clean runs of the halfpipe.

Ripper boy Mitchell Davern had the highest scoring run of the day which featured plenty of amplitude and impressive grabs as well as an inverted flip known as a ‘crippler’. Zoi Sadowski Synnott and Daniel Bohinc topped the Shredders’ category.

The Youth competitors took the level of competition up a notch with winner of the girls’ group, Lucy Hayes, the only girl to do a 360. Matthew Cox’s run was described as “outstanding” by judges and with an emphasis on “big”. His winning second run featured five rotations. Today’s victory means that Matthew has won all five snowboard disciplines in the Youth category at Junior Nationals.

Matthew was quick to thank his coach, Sean Thompson, for helping him achieve “five from five”, saying that his victory was largely thanks to “a good mental game today.” He also said that “the pipe was the best (condition) it gets” and thanked Cardrona for “putting it on today.”

Judges were pleased to see a large field of 10 keen competitors in the Junior girls’ category but described their riding as “timid”. Kristal Roberts won the category with a well-controlled run.

Click here for results from the Bonfire Snowboard Halfpipe

There were plenty of smiling faces on the course today – and not just from the enthusiastic young competitors in the K2 Ski Big Mountain. The judges were equally excited to see how the day would play out.

The Junior Nationals provides a rare opportunity for youth skiers to compete in the big mountain discipline and is one of only three such events to be held in New Zealand this year. The event traditionally sees an extremely high standard of competition and this year was no exception. In particular, the judges described the Shredder girls (aged 11 and 12 years) as “insanely good”.

The course venue was the same as used by the snowboarders in yesterday’s Free-ride competition: the Tullips run on the lower left side of Captain’s basin. With the weather changing intermittently from blue skies and sunshine to cloud, the course had to be put on hold several times. Ruggies, Grommets, Junior and Youth competitors were able to complete two runs while Rippers and Shredders competitors had only one run to score top points judged on line, control, air and style, fluidity and technique.

Ripper girl Zac Teen’s fast, aggressive skiing in the fall-line earned her a gold medal while Jasper Bloomfield’s technical line meant that he also stoop atop the podium during the afternoon’s prize giving.

The Shredder girls were stand-out performers and matched the boys in their age group with their exceptionally high level of skiing. Judges commented that the race background of the girls in this age group was very obvious and the top two place-getters showed such strength and confidence in their skiing that their performances were worthy of a wild card entry to the Freeski Open of New Zealand.

First place went to Sophie Thompson, a ski racer who loves the big mountain discipline because “it’s fast and the big drops are fun and you can do whatever you like” in your run.  Judges praised Sophie for her “fantastic technique, accurate line choice and lack of hesitation.”

Another ski racer, Maxwell Watt, took out the Shredder boys’ class with a fast and fluid run which featured a huge air on the bottom feature. Max took on the challenging job of being the first skier of the day, making his winning result all the more impressive.

The Youth girls’ top prize went to Olivia Jones who chose an exposed line through the course, showed good technique and skied fast through the bottom section. Finn Bilous topped the results table in Youth boys starting fast out of the gate and keeping up the pace all the way to the bottom having thrown in a big side air off the main feature and a 360 safety grab off the bottom air for good measure.

Competitors in the Junior boys’ category had the crowd cheering as best mates Charlie Murray and Julian Hampton fought hard for the win. Julian emerged as the winner, scoring highly with the biggest air and longest jump of the day.

“It was anyone’s game today,” commented Julian. “I knew I had to something really good in order to win.”

Click here for results from the K2 Ski Big Mountain

The final day of competition takes place tomorrow with the Salomon Ski Slopestyle for Shredder boys, Youth and Junior.

Entry to the Awards Night is free for Junior National competitors but under-14s must be accompanied by a paying adult from 6.45pm. Tickets are available at www.snowsports.co.nz/shop 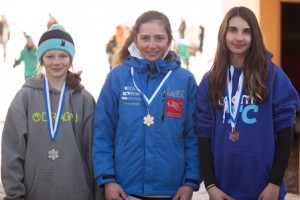