The strong and deep field of 60 men included reigning world champion Ryan Stassel (USA). Riders were split into two heats with the top three from each heat making it straight through to finals while the next five place riders will first compete in semi finals. The NZ pair competed together in heat one with Carlos Garcia Knight finishing in second place on 88.25 points from a possible hundred and Tiarn Collins third on 86.75. Top qualifier in their heat was Sweden’s Niklas Mattsson on 92.50 points.

Riders each took two runs down a 650 metre long course which features a wallride, staircase and a highrail in the first section followed by a kicker line of 3.50 metre high jumps.

Kreischberg is the first of five slopestyle World Cup stops this season with Laax (SUI), Seiser Alm (ITA), Mammoth Mountain (USA) and Quebec City (CAN) following within the next four weeks.

Finals will be staged in a three-run, best one count format on Saturday, January 14 at 2 PM CET (Sunday 2.00am NZT). For further information on the World Cup programme in Austria click here. 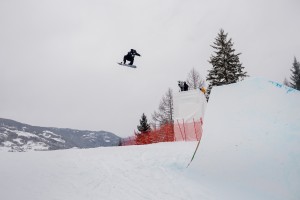