Zoi’s score of 71.25 saw her miss the podium by the narrowest of margins with 2017 X Games slopestyle gold medallist Julia Marino (USA) finishing in the bronze medal spot on 71.85 points. American riders made a clean sweep of the podium, Olympic champion Jamie Anderson the best qualifier and last to drop in of the eight girls, scoring 80.25 for the win. Second place went to Hailey Langland, fresh off a big air win at the X Games, on 77.40 points.

Seemingly unfazed by the two day hold on competition schedule thanks to the weather and still facing challenging conditions with flat light today, Zoi was able to put down her top scoring run on her first of two attempts.

Starting out with a smooth run through the rail section at the top of the course Zoi then nailed the jump line with a backside 540, switch back 540, and frontside 720 to finish.

“It’s a run I’m really hyped on,” she said. “My goal today was just to land my run so I’m really happy with the result.”

After finishing third in qualifying heats, Tiarn Collins pushed hard with technical tricks for a high scoring run in finals but a couple of small mistakes on the rail section were enough to cost him valuable points.

Although not able to execute his rail tricks quite as planned, he landed a clean and technical combo through the jump line - including cab 9 switch double tail grab, front 10 mute, back double 12 - and was happy enough to finish eighth in the 16-man final.

“Making finals again was awesome and I was stoked to make it top to bottom of the course today,” he says.

He will not have to wait long to deal with any sense of unfinished business with the next World Cup competition due to take place in Quebec City, Canada from 9-12 February.

The Mammoth Mountain men’s freeski slopestyle competition was due to take place immediately after the snowboard finals today but with weather conditions deteriorating and no further contingency days left in the schedule the competition had to be cancelled. 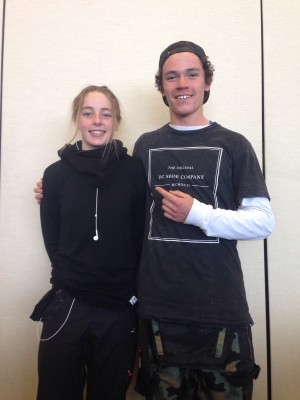