The day once again brought cold weather and gusty conditions to challenge the young riders. Rayward had a sketchy start to his semi-finals run with a few wobbles on the rail section up top but, determined to be competitive, he held the rest of the run together, rode the jumps well and just snuck into final rounds in sixth place.

Half an hour of practice time later and finals were underway with 12 riders in the hunt for the podium.

“Carlos was feeling confident and ready to step things up for finals,” explains his coach Sean Thompson. “He had a run in mind and it was time to go for it. He’d landed it clean in practice.”

“We’ve been working hard on landing the first run to take the pressure off,” adds Garcia Knight. “I’d put down my hardest run first try in qualifiers so I was feeling good going for it in finals.”

Sticking with the same combination of tricks on the rail section, the step up move came in the form of an extra rotation on the second jump with Carlos taking the frontside 720 from qualifying up to a 1080 in finals before once again finishing with the backside double cork 1080.

Were it not for a slight touch of the hand to the snow he may well have found the extra 0.25 needed to take out first place. Garcia Knight finished second on 88.00 points with Dutch snowboarder Erik Bastiaansen first on 88.25. Third place went to Finland’s Mikko Rehnberg on 82.25

Ifs and maybes aside, Garcia Knight was more than happy with his performance.

“I can’t really comprehend it right now, I’m so excited,” he said. “This is an event we’ve been targeting for a while and I’m glad to put down a run I’m stoked on.”

Rayward earned his best score on his second run, recovering well from a fall on run one and coming back strong for a second run score of 73.75 and eighth place. 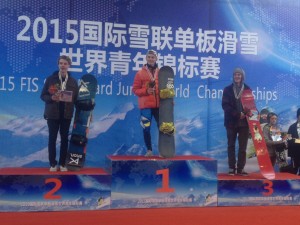