Spindleruv-Mlyn, Czech Republic (15 March 2013) - It was one of the more commanding performances from the New Zealand women’s snowboard team in a big field of fifty-six riders from 23 different nations hungry for Olympic qualifying points at the Czech Snowboard World Cup in Spindleruv-Mlyn.  The innovative slopestyle course, consisting of a hip entry into a halfpipe with rails on the decks of the pipe linking into a three-way rail feature and finishing up with a jump, had provided challenges to the crew over the course of the three-day training period.  All of the NZ team made the most of the training window, though, honing their skills and piecing together the best runs they could in the glacial conditions experienced.

Shelly Gotlieb progressed directly to finals by placing second in her heat with a standout clutch second run which included a cab 270 indy over the hip, the best frontside air of her life on the first hit of the halfpipe, slick rails and a stomped backside 720 indy over the jump.  Gotlieb scored 83.66 placing her in second in heatone1 behind Jenny Jones from GBR.

Rebecca ‘Possum’ Torr celebrated her 23rd birthday by landing both her runs with an improvement to her overall execution in the second run which included a skate style nosegrab tail-tap on her first hit in the pipe, a back-lip on the down rail and a clean backside 540 indy-poke over the jump.  Torr just missed finals but progresses to semi-finals with her score of 82.66.

Stefi Luxton competed in heat two, and continued to demonstrate consistency, landing two solid runs; however, missed out on semi-finals and had to settle for a 20th place overall finish.

Christy Prior was the last competitor to drop in the field and blasted a huge method over the hip followed by back-to-back 360s in the pipe, a front-blunt sameways on the down rail and a backside 540 on the jump.  Prior scored 87 points but in a strong heat this put her in third place behind former World Tour Champion Enni Rukajarvi from Finland and Silje Norendal from Norway.  Christy and Possum will be the top seeds in tomorrow’s semi-final and will be looking to repeat and improve on their performances from today to join Shelly in the six lady final.

In the men’s event, Stef Zeestraten put in another gritty performance after suffering a heavy crash in training and spitting blood at the top of the course.  Improving his score in run two and rewarded for his difficult switch backside doublecork 1080, but with a few sketches Stef finished ninth in his heat missing out on the top seven cut to semi-finals and ending up 38th overall.

Ben Comber was linking his tricks well in training and went for it, attempting a technical crippler 720 entry over the hip and stylish frontside 1080 over the jump.  With a bail in run one and a sketch in run two, Ben finished 12th in his heat and in 51st overall: both men in the top half of the 120-strong field. 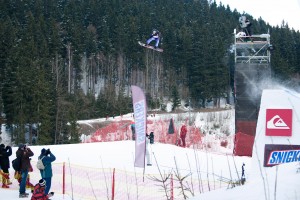