NZ Ski Racers in the Medals at ANC Races in Australia

Daniel Meier of Austria rounded out the podium in third place, 0.38 seconds behind Barwood.

The men's field was stacked with world class racers which means that the Kiwi racers' results today (6.00 and 6.45 FIS points respectively) will see their world rankings lowered to approx. 40 and 42nd in the world.

"I couldn't be happier with today's race," said Barwood. "It's my first Continental Cup win and exciting to make a 6 point result. On the first run I took advantage of a fairly clean track, starting in bib 1. The second run was super rough but I fought through and managed to move into first place."

Sara Hector of Sweden (currently ranked 20th in the world), took out the top spot in the Ladies' GS, with Julia Mutchlechner of Germany in second, 1.19 off the pace. New Zealand's Alice Robinson finished only 1.66 seconds behind Hector in third place. This is the fifth podium finish for the 15 year from Queenstown as she continues her phenomenal start to her first year of FIS racing.

Racing continues with the second GS of the ANC series tomorrow at Thredbo with Slalom on the 23rd and 24th before the team returns to New Zealand to compete in the Audi quattro Winter Games NZ Opening Ceremony Dual Slalom at Coronet Peak on Friday night (25 August).

The New Zealand leg of the ANC series continues from Monday 28th - Thursday 31st at Coronet Peak before it moves to Mt Hutt for the Super-G series on the 5th and 6th September. 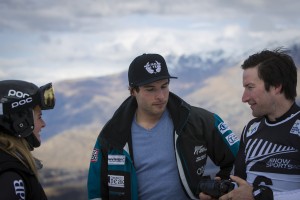