Over the course of the four day event Adam Hall won a silver and a gold medal in the men’s standing slalom – the discipline in which he won a gold medal at the 2010 Vancouver Games – while sit-skier Corey Peters (New Plymouth) won silver in the Giant Slalom (GS).

75 skiers from nearly 15 countries attended the event giving the New Zealand team the opportunity to benchmark their performances against their main rivals for Sochi.

Corey Peters faced off against Japanese three-time Paralympic medallist Taiki Morii in the GS on day one of the World Cup on Friday 17 January. Morii, the reigning Paralympic silver medallist in the event, finished first with an overall time of 1:57.06, beating Corey’s time of 1:57.38 by fractions of a second. Austria’s Roman Rabl finished third with a time of 1:57.46.

“I’m really pleased to make the podium today with such a strong field here,” commented Corey. “Coming into the second run the top eight were separated by less than a second. Things are really on track with my GS.”

Spurred on by a podium result Adam Hall fought hard for the win in the second slalom race on day three of the World Cup.  France's double world champion Vincent Gauthier-Manuel (1:17.53) could not hold off the charge, with the two men running nearly side-by-side throughout. In the end it was Hall (1:17.22) who improved by over two seconds on his final run to see off Gauthier-Manuel and Russia's third-place finisher Alexey Bugaev (1:18.10).

The race was Adam’s final World Cup ahead of the Winter Paralympic Games in March.

“Finishing off with win against a strong field and the main medal contenders for Sochi is a good indication we’re on track,” said Adam.

“We just have to make the most of all our opportunities and keep working hard. We are making good progress at the right time.”

The final day of racing saw Corey Peters line up for a second GS race. Sitting in first place after the first run, Corey was looking good for another medal until a mistake in the second run cost him time and ultimately the podium. His time of 1:56.42 put him in sixth place equal with German racer Georg Kreiter. The race was won by Swiss athlete Christoph Kunz in 1:55.55.

“At this level there’s little room for error,” acknowledged Corey. But still upbeat about his performance adding, “It gives me good confidence knowing I’m up there with the best in the world and I’ll spend the next 45 days pre-Sochi working hard on improving and getting faster. Things are looking on track to perform well in Russia.”

Adam and Corey will now travel to Europe to train and compete in Europa Cups before heading to Russia for the Paralympic Winter Games which commence on 7 March. They will be joined in Sochi by para-snowboarder Carl Murphy.

Results from the IPC World Cup are available here 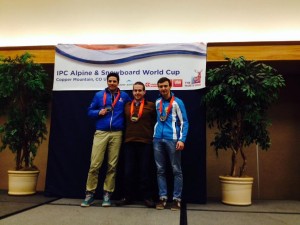