With the New Zealand summer fast approaching winter sports and cold weather will quickly become a distant memory for many but not for New Zealand’s top adaptive snow sports athletes. New Zealand Winter Paralympians Adam Hall, Carl Murphy and Corey Peters are fully focused on a busy season of on snow training and competition in the northern hemisphere.

Adaptive skiers Adam Hall (Wanaka) and Corey Peters (New Plymouth) and Para-Snowboarder Carl Murphy (Wanaka) were all members of the New Zealand team at the Sochi 2014 Paralympic Winter Games in Russia during March. Corey Peters won New Zealand’s only medal with a Silver in the Giant Slalom in the men’s sitting class.

Carl Murphy will be the first member of the team to depart New Zealand, travelling to Austria for a training camp at the beginning of November. Carl will then travel to The Netherlands to compete in an International Paralympic Committee (IPC) World Cup race at the SnowWorld indoor facility in Landgraaf from 19-20 November. He claimed two Gold medals in the Lower Limb Impaired category when he last competed at this event two years ago.

Carl is looking forward to the season ahead with the opportunity to put his 2013-2014 injury marred season behind him. A knee injury in December 2013 put him out of action for several weeks meaning that he did not compete in the World Cups leading into the Sochi games. He placed fourth in the men’s snowboard-cross event and was disappointed to finish just outside the medals.

Ski racer Adam Hall, who competes in the men’s standing category and sit skier Corey Peter will leave New Zealand at the end of November and will once again be based in the United States at Colorado’s Winter Park resort.

Competition will get underway with North America Cup (NorAm) races in Aspen in early December. Both Corey and Adam will be looking to make a strong start to their season by backing up podium results achieved at NorAm s and World Cups in 2013.

During the 2013-2014 northern hemisphere winter Adam Hall won one Gold and two Silver IPC World Cup medals and four Gold, one Silver and a Bronze at NorAm races. With a strong build up to the Games Adam had been hopeful of defending the Gold medal he won in the Slalom at the Vancouver Games in 2010.  It wasn’t to be, with his best result a fourth in Super-Combined and a seventh in the Slalom.

“I’m looking for redemption,” says Adam. “I feel that I’m in a strong position leading into this season and am happy with the progress I’ve made this season in New Zealand. I’m ready to put everything in to the races and am looking forward to some strong results.”

Corey Peters placed fourth in the Super Combined and sixth in the Super G in Sochi in addition to winning the Silver medal in the Giant Slalom. He also enjoyed a strong lead in to the Games tallying up one Silver World Cup medal, two Gold and three Silver NorAm medals.

“I’m really looking forward to getting back into competition again and continuing to build on my success from the Sochi Games,” says Corey. “We’ve spent the New Zealand winter training on snow and in the gym and I’m feeling strong and confident for the season ahead. Now it’s time to measure myself against my international competitors. I’m learning and upskilling all the time and I’m ready to get back onto snow and put everything I’ve learned into practice.”

The New Zealand adaptive snow sports team’s pinnacle events for the season will be the IPC World Championships in La Molina, Spain in February for Carl and in Panorama, Canada in March for Adam and Corey.

The team will also be joined this season by development level athletes, skiers Samuel Tate and Aaron Ewen, who will travel to the USA for their first experience of training and racing outside of New Zealand. 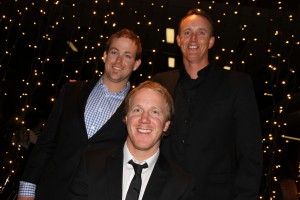