NZ Junior Freeride Tour Kicks off at The Remarkables

Queenstown, New Zealand (8 September 2018) - It was a brilliant day at The Remarkables for the first stop of the New Zealand Junior Freeride Tour held on the face of  Shadow Basin. An international field with riders from Japan and Australia joined the 58 strong field. The youngest competitor was just five-years-old.

Alistair Garland took out the 14-18 male ski category with a 92 score run, spinning 360’s both ways of cliff drops, with sister Phoebe winning the female 14-18 ski competition. Ronan Thompson won the snowboard category with his first venture into a Junior Freeride competition, with some impressive riding. Thomas Benson topped the ski boys' U14, the largest category, with a 10-point margin.

A large contingent from Mt Olympus and the North Island ventured down for this stop. Mt Olympus is the venue for next weekend. 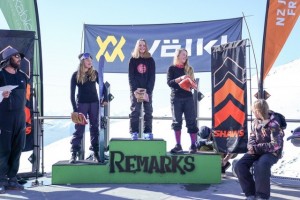