With only two months to go until the Olympic Winter Games, this event serves as an opportunity for the world’s best freeskiers to test their mettle. It is also a key qualifying event for the US team - which includes Sochi gold medallist David Wise and current World Champion Aaron Blunck.

In the first of two heats 16-year-old Porteous – who was named to the NZ Olympic team in October- finished a close second to Wise. Porteous landed an impressive score of 90.60 (from a possible 100) on his second run, increasing his amplitude as he worked his way down the pipe and finishing with back to back double 1260s at the bottom.

“My goal today was to make finals,” said Porteous. “I am super happy with the result and the way I skied. I would really have liked to put in some of the new tricks I’ve learnt but unfortunately I wasn’t able to. It’s really good to be in this position going into finals.”

Beau-James Wells finished in third place in heat two, also making the top four cut-off for finals. Wells returned to competition in August this year following an injury break and is now tracking well towards qualifying for PyeongChang 2018.

Wells landed a high scoring run on his first attempt, rewarded for consistent amplitude and good trick variety, also including both-ways double 1260s in his run. The heat’s top score went to the USA’s Torin Yater-Wallace.

NZ’s Miguel Porteous and Byron Wells, who have both gained selection to the NZ Olympic team, did not progress to finals, Porteous, crashing on both of his competition runs and Wells opting to use the event purely for training purposes.

In the women’s field, Janina Kuzma, also selected to the NZ Olympic team, put down a strong first run but needed to up the ante to hold on to her place in the top four and progress to finals. She came unstuck on her second hit and finished sixth in her heat. Teammate Britt Hawes finished 13th. Chinese athlete Kexin Zhang was the top scorer in the heat with the strong US contingent of Devin Logan, Brita Sigourney and Annalisa Drew close behind.

Freeski halfpipe finals are scheduled for 8 December (Saturday 9 December NZT). New Zealand athletes will be back in action again tomorrow with snowboarders Rakai Tait, Freeman Andrews and Dakota Craig taking their turn in the halfpipe at Copper Mountain. 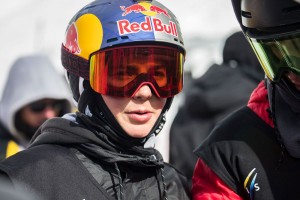