Whistler, Canada (6 April 2015) –The Mackenzie Investments Whistler Cup took place in Canada over the Easter weekend with 11 New Zealand alpine ski racers in the U14 and U16 age groups taking on 420 athletes from 26 countries and coming away with some impressive results. Queenstown’s Alice Robinson was the top performer amongst the Kiwi contingent, winning the ladies’ U14 Giant Slalom and Parallel Slalom.

The New Zealand athletes posted a total of eight top 10 and another five top 16 finishes.

In the ladies’ U16 age group Eden Mckay (Auckland) placed fifth in the GS and 13th in the Super-G. Georgia Bushell (Christchurch) had strong finishes with a sixth in Super-G, 14th in GS and 16th in Slalom. In the men’s U16 age group Kit Pascoe was the top NZ competitor with 33rd place in the Slalom.

Held under the auspice of the International Ski Federation and hosted by the Whistler Ski Club, the Whistler Cup has become one of the largest and most important junior ski races on the international calendar. The Whistler Cup has launched the ski careers of many World Cup champions and attracts entries from the skiing power house nations of Europe as well as North America. The New Zealand athletes competing at the 2015 Whistler Cup were: 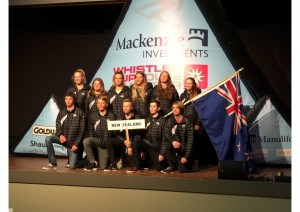