s the northern hemisphere season starts to wind down, members of the New Zealand Ski Racing team give us a recap from the past month’s racing and training.

I placed 11th in the Nor-Am finals super-combined at Nakiska, Canada on 13 March. I was 30th after the Super-G leg and skied the fastest slalom run to finish in 11th, scoring a 37 point result. I was super happy with my result after struggling for form over the last month. I have three more races left of my northern hemisphere campaign with two GS and one slalom at Nakiska.

With just a few more opportunities left I'm really feeling the pressure to make the most of the races available. My training has been going better than ever; I'm feeling very fast and starting to get some real power out of the turns. My racing hasn't been going so well though. Since the World Champs I have competed in six races, crashing in four of them and falling over and carrying on in the other two. In Stari Vrh (SLO) I came 22nd and in innerkrems Super G I came 28th.; nowhere near where I hoped to be after training so well. That's all part of being a good racer. Right now I am in Zagreb, (CRO) competing in some GS races and after that I plan to do only a few races before I heard to the British Championships in Meribel, (FRA) which will be my final races of the season.

The last few weeks have been busy with a lot of travelling for races. Unfortunately the weather hasn't been great for most of them. I joined Mike Rishworth (AUS) and Nick Prebble at Hoch-Ybrig, Switzerland for two GS races, but both were cancelled due to fog and dangerous snow. The first run was held on the second day and I managed fifth so it was frustrating not to complete the race.

I raced the GS World Cup at Garmisch-Partenkirchen and had an ok run in the top half of the course, but made a massive mistake coming onto the last flats, almost crashing out of the course and thus losing all of my speed for the last 15 turns. It was pretty disappointing but I was able to take some good things away from it, feeling like I'm making good progress on the 35m radius ski.

Recently I also joined up with Nils Coberger and the other New Zealand men's team members for a Super-G in Innerkrems, and skied fairly well into ninth place, 1.6s out and 0.7s off second place. The run included a line mistake in the flats which cost me a lot of speed for the last six or so turns.

We also raced two GS races at Turnau, Austria, where I returned to racing on the old 27m skis. I had a hard time adjusting to the tempo of the old ski, and only managed an eighth place in the first day.

Next week I will be in Sochi for the Europa Cup finals, as a test event for the 2014 Olympics. I'm looking forward to getting experience on the Sochi track, especially in Super-G, and will be working hard to finish my season well, before heading back to New Zealand to finish uni.

It’s been a pretty full on schedule competing in the World Champs with the first races on 20th February in Annaberg where I scored a 32.51 in slalom. Following these races we headed off to Turnau but both days of racing were cancelled due to heavy snowfall and poor course conditions so it was back to Leogang for a bit of training.

Next stop was Mutters, Austria for two days of slalom. I was super stoked with my results on the first day, scoring a 25.28 and also winning the second run after starting bib 41 first run. I didn’t handle the ruts on day two quite as well but we had some awesome weather which was a bit of a first.

Back to Leogang to tune and pack again and then we headed over to Slovenia for some giant slalom races at Stari vrh. I was pretty pleased to make points again with a 29.58 result.

We didn’t wait around for day two as the weather was supposed to be very wet so we took the four hour drive to Turnau, Austria for two more giant slalom races. I wasn’t quite putting two fast runs together there but overall was reasonably happy with how it all went.

Next up are GS races in Zagreb, Croatia.

I have been racing in Switzerland and Austria. I started off with two good slalom results in Juan Sui, on the 21st and 22nd February, where I finished 16 and 15 against a strong field and scored a personal best slalom result of 33.43 points.

Following this I went to Thyon Sui, for GS races on the 23rd and 24th February but did not finish either which was disappointing. After this I raced in Thalkirchdorf, Germany and Bad Hofgastein, Austria where snow conditions made racing from a higher bib number difficult, resulting in one 30th position and five DNFs. I am feeling positive about the upcoming races where I plan on doing some national championships and FIS races.

Since the World Championships, focus has largely been on improving my SG ranking. My goal is to be in the top 10 in the world for my age group, currently I lie 18th. However, it is very tight between 18 and 10th. I need to drop nine points from 56 to 47 to do this and am tracking towards that at the moment. I scored a personal best of 52 points in Innerkrems last week, which will bring me closer to the goal. At Innerkrems we had a very tough field, so I was really pleased to make my best result in that race.

We are heading to Krvavec in Slovenia and then Garmisch in Germany for more SG at the end of the month. In between I will be racing and training GS and slalom at the German Junior Championships and at their senior championships.

My first Ski Cross World Championships in Voss, Norway are over. We had great weather, great snow and it was cool to have the other freestyle ski disciplines around. I finished in 38th position, narrowly missing out on making finals by 0.4sec. I desperately wanted more.

My qualification run had some small errors that I need to iron out, especially when the pressure comes on to lay down the run; only one chance, one opportunity.

It was great to have two training sessions on the track which has been non-existent for us this season. The Audi World Cup Ski Cross tour has been unlucky with the weather this season and for several races we have had to settle for just one training run – not making it easy for the rookie on the tour!

I am now up in Are, Sweden for my last two World Cup races of the season. I’m really excited to give it everything, execute my new skills and to put some fast runs down and get in the mix of the finals.

I've been skiing FIS NCAA for The University of Vermont out here in Burlington whilst I have been in uni full time. I didn't go to World Champs due to obligations with the UVM Ski Team.

We recently had our NCAA National Championships, which we won last year. We were winning until the last day but ended up third behind University of Colorado and University of Utah. It was bitter sweet but I’m still stoked to be up there with some of the best teams in the country.

Personally my season has been okay. In December I came third at Steamboat FIS slalom and was skiing my best. But after that I put my back out and didn't ski for about a month. Straight after that I came out to Vermont to start college and get into races but struggled a bit with pressure to perform for a team and not just for myself. It was a bit of a change! I managed to get some top 13 results and scored a PB in GS at Middlebury which was decent, but still less than I hoped for.

Although NCAA season has come to an end, we still have a lot more races to go. We have the Eastern Cup finals next week, then the Canadian and US Nationals as well as Canadian and Colorado Spring Series. I’m hoping to lower my world ranking in these upcoming races.

Training has been going sensationally well and I’m looking forward to taking it into my current race series in Lutsen, Minnesota which involves two GS and two slalom races. I am moving base to California for the next month where I will attend the US Nationals in Squaw Valley. 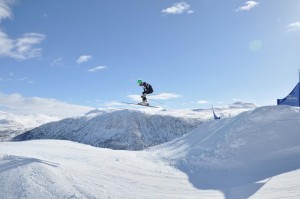