Nothing but Gold will do for Carl Murphy

Big White, Canada (19 January 2015) – Para-snowboarder Carl Murphy has claimed a gold medal in banked slalom at the International Paralympic Committee (IPC) Para-Snowboard World Cup in Big White, Canada today. The result comes off the back off a bronze medal in the snowboard cross event on Saturday.

“It feels so good to be on top of the podium,” says Carl. “All my hard work I have put in especially in the NZ season and training in Austria late in 2014 is paying off.

“I had a clear focus on what I wanted to do today and how I wanted to ride.  I was extremely focused finding that next level that I needed to get to the top of the podium rather than settle for silver or bronze.”

Banked slalom has been added as a new discipline this season following the successful debut of para-snowboard cross at the Paralympic Winter Games in Sochi last year.  Carl won silver in this discipline at the first World Cup held at Landgraaf in The Netherlands in November. He says he enjoys the new discipline because it combines both alpine and boardercross skill.

Banked slalom is a timed event with each rider given three runs of a slalom course and the combined time of their two fastest runs counting as the final result.

Sitting in second place after his first run, Carl says it took the right mind set and support from his coach John Shelly to lift his game and go on to post the two fastest times of the day with his second and third runs.

Carl took gold ahead of Finish rider Matti Suur-Hamari in second and the USA’s Keith Gable in third.

“Conditions were not perfect but I took advantage of what we had worked on in the training day the day before,” explains Carl. “I took a clean smooth line through the technical section and pretty much hammered the fast straight sections.”

With the 2015 IPC Para-Snowboard World Championships soon to take place in La Molina, Spain, Carl says he’s pleased with his build up despite having had limited training time on snow in recent weeks. Carl has been at home in New Zealand following the birth of his second child in December. Today’s race falls on the same day as his son Oliver’s fourth birthday.

“Oliver told me I was going to win so he was right,” laughs Murphy. “Happy birthday Oliver.”

Carl will now travel to the USA to compete in adaptive snowboard cross at the X Games on Thursday.

World cup results will be available at http://www.paralympic.org/snowboard/calendar 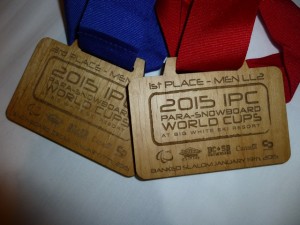