The “Big Air and the City” World Cup competition took place on Saturday evening local time on an imposing, 47-metre-tall, purpose-built scaffold jump that has been constructed in Milan’s EXPerience Park. Milan is the first stop on the new FIS Super Series tour, in which FIS Freestyle Skiing and FIS Snowboarding have teamed up for what will be a trifecta of high-profile, city-based, night time events over the course of the 2016/17 season.

After a tough practice with a crash that put him into the fence, Carlos Garcia Knight pulled through to stomp his first run with a back double cork 1080 nose grab for a score of 78.00 points. With a best-run-of-two format, Carlos knew he would have to step up to make the top 10 cut off and move through to final rounds. He went for the trick that he had crashed on in practice, the switch backside 1260, but was unable to hold onto his landing. Carlos finished in 22nd place from 49 riders.

“It’s always good to land the first run of the first contest of the season,” Carlos said. “Now this one is behind me I’m hyped to go into Korea with the switch back 12 on my mind.”

The competition was Natalie Good’s first World Cup City Big Air event and although she found it a challenge adapting to the man-made jump in training, she still landed the frontside and backside 360s as planned. After a fall going for the backside 360 on her first qualification run, Natalie decided to play it safe and focus on getting points on the score board. She went for another backside 360 on run two and stuck the landing to finish 18th from 21 riders. While not her best performance, Natalie said that she is looking forward to her next events.

Natalie and Carlos will join Tiarn Collins (Queenstown) and Corrah Phillips (Wanaka) in Alpensia, Korea for the next Snowboard Big Air World Cup on 25 November.

Anna Gasser (AUT) and Marcus Kleveland (NOR) were the respective winners of the men’s and women’s FIS Snowboard World Cup in Milan.

Full results can be viewed online. 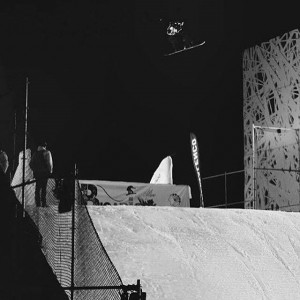