There will be a new Top Boys School as Trident High from Whakatane, Champion for the last three years will not be returning this year. Ex-student from Trident High, Phoebe Crawford, has returned from a year in Europe and will be representing St Peters School Cambridge this year. Phoebe has won both the Giant Slalom and Boardercross in the past and again she will be strong contender.

In the Boys Division, Giant Slalom and Slope Style Champion, Liam Whiley, may not be returning but younger brother Ollie has now replaced him as Number One in the Kristin team. Sam Redman from Westlake Boys High was third last year in the Slope Style and he will want to improve his placing this year.

Joel Clegg from New Plymouth Boys High placed third in the Boardercross last year and he will want to improve this year. The dark horse in the field is Swiss student, Niklas Meindl from Taumarunui High who performed really well in the recent Waikato Secondary School Champs.

As usual, someone else will come out of the woodwork and surprise everyone. Who will it be this year?

Photos from Liz Brooker will be available along with results on facebook.com/k2nisssc 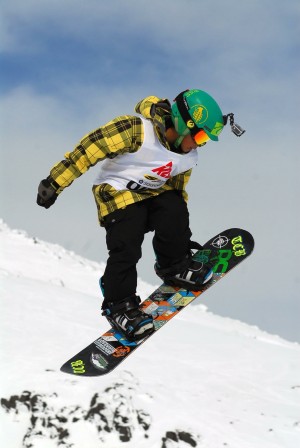