Right after he won Nico was speechless, saying “I can’t believe it, another one, like what?! I am genuinely speechless”.

Nico left it until his fourth and final run to land what the commentators described as the most technical halfpipe run ever landed in competition. He dropped in switch starting with a switch right 900, into a newly learnt switch left double 1440, then into his trademark back-to-back double 1620’s before finishing off with a huge left alley oop double 1080.

“It still hasn’t sunk in, I was the last to drop so it happened so fast. To piece all that together in arguably the most high-pressure moment of my skiing career, I can’t believe it!” Nico explained moments after landing his fourth run.

Tonight was the first time Nico and Miguel have competed alongside each other at X Games, marking a special moment for the brothers.

Zoi explained “Honestly, words can’t describe it, I am so stoked. Seeing Nico lace the best run of his life tonight tops it off”.

X Games marked the final freeski and snowboard event before the team heads to Beijing to compete in the 2022 Winter Olympic Games starting on February 4th. 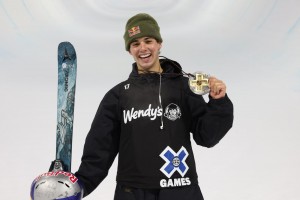