The 2021/22 FIS Freeski Halfpipe World Cup season got underway this morning at the USA’s Copper Mountain Resort with New Zealand’s Nico Porteous qualifying through to finals at the top of his heat.

With the best-of-the-best lining up in the start gate but only the top five men from each of two heats earning a place in Saturday’s finals, Nico wasted no time punching his ticket, landing a score of 96.00 from a possible 100 points on his first of two runs.

“There was no margin for error today,” says Nico after landing one of the biggest qualifying runs of his career, incorporating one the biggest tricks in his bag, a double 1620, in order to be sure of a top-five result. “After looking at the start list I knew I had to go harder than normal but I got the run down I wanted and I’m really happy with how things are going.”

Nico had an outstanding 2020/21 season, landing on the podium in every event he dropped into and earning himself the world championship title. He was the first halfpipe freeskier to land a combination of a right 1620 into a left 1620 in competition which has defined the international progression in halfpipe skiing for the past eight months.

Come Saturday morning’s finals, Nico will be up against a strong US contingent led by Aaron Blunck, who was the top qualifier in heat one and who already has three World Cup victories to his name at this venue. With PyeongChang 2018 silver medallist Alex Ferreira (USA) qualifying just one and a half points behind Nico in heat two, his will be another name to watch. Two-time reigning Olympic gold medallist David Wise (USA) is also in the mix along with Canadians Simon D’Artois, Noah Bowman and Brendan Mackay who are no strangers to the world cup podium.

Miguel Porteous took a more conservative and strategic approach to his day due to a recent but minor knee injury. With his main focus achieving a top-16 result in order to keep him on track towards qualifying for the 2022 Olympic Winter Games, Miguel got the job done with a seventh-place finish, outside of finals qualification but ticking a box for his longer-term plans.

“The aim was to do what I needed to do to meet Olympic qualifying criteria and I managed to do that without having to risk a second run so it couldn’t have gone better,” says Miguel. With time now to rest his knee Miguel expects to be back to full strength to compete at next week’s Dew Tour alongside his brother.

Men’s finals are scheduled to begin 8.30am Saturday (NZT) and will be livestreamed on the FIS Freestyle Skiing YouTube channel along with live scoring. 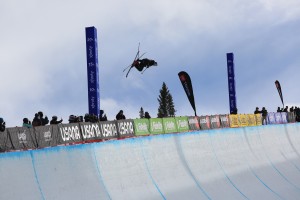