Calgary, Canada (16 February 2019) – A silver medal at the FIS Freeski Halfpipe World Cup in Calgary has put New Zealand’s Nico Porteous to the top of the World Cup Tour leader board. Porteous went into the competition just 10 points behind Canada’s Simon D’Artois whose seventh-place finish today meant that he would relinquish the yellow bib.

D’Artois and countryman Noah Bowman were names to watch in a strong field, competing on home snow and with World Championship third (Bowman) and fourth (D’Artois) place finishes already in the bag, but on the night, it was two-time Olympic gold medallist David Wise (USA) who could put down the best performance.

Stormy weather added an extra challenge but Wise responded with a score of 90.00 on his first run of three. Porteous also earned his best score on his first attempt, landing two double 1260s and scoring 87.75. The young Kiwi pushed hard to up his score, on his second run landing a double 1440 safety grab for the first time in competition, but the execution wasn’t clean enough to take the win. Bowman once again finished in the bronze medal spot, with a score of 85.50 points.

“I’m super stoked on tonight,” said Porteous. “It was super challenging conditions, really strong winds and quite a bit of snow at the bottom but I’m more than happy to come away from this comp in second place after battling these tough conditions. But the thing I’m most happy with is having the yellow bib over my shoulders. I’m excited for Mammoth.”

The season’s finals are scheduled to take place at Mammoth Mountain, USA from 6-8 March. 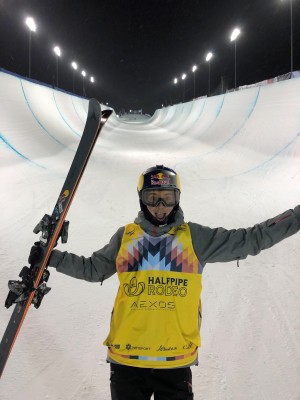