The 16-year-old, who claimed an Olympic bronze medal in PyeongChang earlier this year, went in to today’s Audi quattro Winter Games NZ competition as the top qualifier. However, a deep landing on his switch 1080 on his first run of three initially had him sitting in second place behind Norway’s Birk Ruud.

Porteous came through with a 93.80 on his second attempt, cleaning everything up and executing a technical run with a left double 1260 and an alley-oop flat spin 540 on his last hit for the lead.

“This means a lot,” said Porteous. “It’s my first Junior World Champs and to come away with the win is really cool.

“It’s all about going forward from now on.”

Another local skier, Ben Harrington made a strong challenge for the podium, holding on to third place until the third last run of the day, when USA’s Dylan Ladd came through with big back to back 900s at the top of the pipe and finished with a super technical double flat 900 down the pipe for a score of 92.80, pushing Harrington in to fourth place and Ruud in to third.

Top qualifier in the women’s freeski halfpipe, Kelly Sildaru faced a strong challenge by Russia’s Valeriya Demidova who showed excellent trick variety and execution with back to back left and right flairs with good amplitude and grabs. However, no one looked more at home in the pipe nor matched the amplitude, grabs and trick execution of Sildaru and she led the field on all three of her runs, finishing her day as the Junior World Halfpipe Champion.

“I’m really happy with my run,” said Sildaru. “Today I did my first nines since my injury (a year ago) so I’m pretty stoked.”

“I couldn’t be happier,” said Miller. “The level of riding out here today was absolutely-phenomenal, all the riders are so talented. This is my fourth Junior Worlds and every year the level just gets higher and higher, I’m honoured to be in such an elite group of riders.”

Mitsuki Ono (JPN) claimed the junior women’s Snowboard Halfpipe title, landing three solid runs, all of which scored above her competitors’ but sealing the deal with a score of 85.80 on run three and confirming that she was “very happy” with her performance 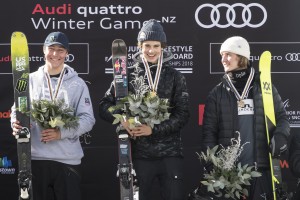