Secret Garden, China (20 December 2018) – 2018 will finish on a high note for New Zealand Winter Olympic bronze medallist Nico Porteous who today claimed the first World Cup medal of his career, a silver in the Freeski Halfpipe.

The FIS Freeski World Cup Tour action has moved to China this week with Nico and brother Miguel competing at the future venue for the Beijing 2022 Olympic Winter Games in Secret Garden Resort. This is the second halfpipe World Cup of the 2018/19 season, following the season-opener at Copper Mountain, USA where Miguel also claimed a silver medal and his first World Cup podium.

“I had a goal this season to get a World Cup podium, so to do that at the second event of the year is incredible,” said Nico. “2018 has been the best year of my life so far, nothing could really top it.”

Nico achieved the top qualifying score of 90.75 in this morning’s qualifying rounds, with Miguel through to finals in third place on 84.75 and Canadian Simon D’Artois qualifying in second place on 87.50.

Competition was originally slated to take place from December 20-22. However, organisers and officials have been looking ahead at a weather forecast predicting strong winds for the weekend and, with that in mind, the event programme was readjusted with qualifying and finals all held today. Having only arrived in China on Wednesday and fresh off competing at the Dew Tour in the USA at the weekend, it was quite the endurance test, but the Kiwis took it all in their stride.

Upping the difficult of his tricks for the final, Nico landed an 88.00 on his first run of three but D’Artois was also pushing hard and scored a 91.25 straight out of the gates. Nico improved to an 89.50 on run two with his run combo of Left 10 double seatbelt, Switch right 9 mute, Switch left double 10 safety, Right double 12 safety, Left double 12 tail, but D’Artois had also raised the stakes with a score of 92.00.

Knowing that he had more to give on his third run Nico increased his amplitude and went for a 1440 on the final hit but couldn’t quite get there, finishing with a 1260, not enough to push his score up any further, while the Canadian increased to 93.50, claiming a gold medal and the World Cup leader’s yellow bib.

“I am over the moon,” said Nico. “I didn’t land the run I wanted but the second run was good and I’m super stoked. It’s a really good day, super good result.”

American skier Hunter Hess finished in third place. Miguel Porteous finished in sixth place, scoring 78.00 on his first run but not then taking his second or third runs, feeling a tweak to the knee and now currently undergoing medical assessment. 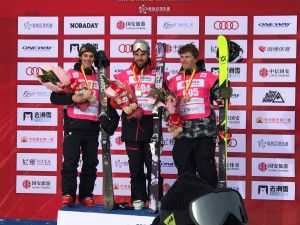