The youngest competitor in the field by some five years, the fifteen-year-old Kiwi says he’s “really pleased with this result as everyone else in the final were the ‘big pros’.”

“It’s been good to see Phoenix Park and the venue for the Olympic Winter Games,” says Nico. “Hopefully I’ll make it back in February 2018.”

Meeting the Olympic qualifying criteria is the focus of the Cardrona NZ Park and Pipe team this season and they have achieved solid results at the PyeongChang test event with both Nico and brother Miguel finishing in the top 16.

In terms of qualifying for the 2018 Olympic Winter Games in PyeongChang, Korea, athletes will in turn need to meet qualification, nomination and selection criteria set by the International Ski Federation (FIS), Snow Sports NZ, and finally the New Zealand Olympic Committee.

An Olympic quota spot must first be earned for New Zealand before personal spots can be allocated which means being ranked in the top 40 men or top 30 ladies (with a maximum of four spots per nation) on the Olympic World Ranking List.

SSNZ and NZOC require an athlete to compete in a minimum of four World Cups or three World Cups and a World Champs event within the qualifying period, and achieve two top-16 results at these events.

FIS eligibility criteria requires an athlete to achieve one top 30 World Cup result and 50 FIS points in the qualifying period. 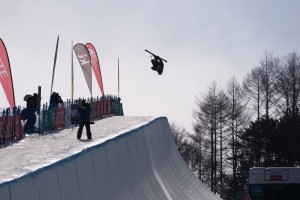