The Halberg Foundation has announced nine sporting highlights for New Zealand’s Favourite Sporting Moment of 2018 – the only category voted for by the public at the 56th ISPS Handa Halberg Awards.

The sporting moment award gives the New Zealand public the opportunity to choose the nation’s most exciting, remarkable, or compelling sporting moment, game or series in 2018.  The highlights include moments from the Winter Olympics, Commonwealth Games, cricket, football, rugby league and rugby.

The full list of Favourite Sporting Moment of the Year finalists are:

The public can vote for their choice once a day by text message or online at www.halbergawards.co.nz.  The winner will be presented at the 56th ISPS Handa Halberg Awards on Thursday 21 February 2019 at Spark Arena in Auckland and televised live on SKY SPORT from 8.00pm.

The finalists were selected by a panel of media representatives who compiled the list of great sporting moments from 2018 for the public to vote on.

Everyone who votes for the Sporting Moment by 4 February 2019 goes in the draw to win a trip for two including flights and accommodation to the 56th ISPS Handa Halberg Awards at Spark Arena, Auckland on Thursday 21 February 2019.   Visit www.halbergawards.co.nz to read the competition terms & conditions.

Voting is now open for the Sporting Moment of the Year award.  You can vote once a day from now until 9.00pm on Thursday 21 February 2019, vote either online or by text.

The Awards, held annually since 1963, are the brainchild of Olympic athletics champion Sir Murray Halberg (ONZ) to honour sporting excellence and as a major fundraiser for the Halberg Foundation – his charity which aims to enhance the lives of physically disabled young New Zealanders by enabling them to participate in sport and recreation.

The core work of Halberg Foundation includes a team of Advisers around the country who connect physically disabled young people to sport and recreation opportunities. The Halberg Advisers also deliver an inclusion training course on adapting physical activity and assist clubs, schools and organisations to provide inclusive events and programmes. The Foundation also hosts the Halberg Games – an annual national three-day sports competition for physically disabled young people. Text ‘halberg’ to 4499 to make an instant $3 donation to the Halberg Foundation. 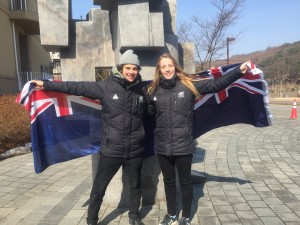