SCHLADMING, Austria (18 February 2013) - The FIS Alpine World Ski Championships have given the New Zealand Ski Racing Team a memorable experience. Over 300,000 spectators jammed the mountainside in the Austrian village of Schladming over a two week period and defending World Champion Ted Ligety (USA) rewrote the history books, becoming the first man in 45 years to win three golds at a World Championships.

The New Zealand team can now take some time to reflect on the event and share their impressions.

“The whole experience was great for the New Zealand team,” says Head Coach, Nils Coberger. “It was a chance to gauge ourselves against the best in the world on the second biggest stage in front of the biggest, loudest ski fans in the world, the Austrians.

“It was a steep but very productive learning curve for the team. Everything is done to the letter of the law and with military precision at this level. The hill preparation was the best ever seen at any level of Alpine racing and a compliment to the Austrian organizing committee and volunteers. Much in the same way the world felt about the Rugby World Cup in New Zealand.”

“The World Ski Championships in Schladming have been an amazing experience,” enthuses Adam Barwood who posted strong results during the competition. “I was lucky enough to race in the giant slalom and slalom races after performing well at qualifications, especially the slalom which has a much larger field of top athletes in the world.  I raced from position 48 into ninth on icy conditions and was very pleased with my performance.

“The course for the slalom event was tight and snow conditions were steep and icy,” continues Barwood. “Overall for me it was a great course which suited my skiing.  Unfortunately I straddled a gate about a third the way down so it was all over.

“The giant slalom course was very steep, very icy and probably the most challenging course I've ever raced on.  I did well in the splits up until I slid out just nine gates from the finish.  Overall Schladming has been an incredible opportunity and one of the best experiences in my life.”

Ben Griffin shared a similar experience on the GS course: “The Schladming race hill was in great condition - super hard and icy with good terrain through it.  The course set was easier than expected so you could attack it most of the way down. Unfortunately, Adam and I both fell at the same turn with about nine gates to the finish, on the final steep. For me, the run beforehand was aggressive, but a little too tight on some gates.”

Although the results didn’t come together quite as Willis Feasey had hoped, he has no doubt about the positive aspects of his experience: “The tech events at Schladming didn't go too well for me. I fell sick for the GS and didn't ski fast enough to qualify for the World Champs,” he explains. “In slalom the qualification race was going well, but then I just straddled one of the gates which was disappointing.

"It was a fantastic opportunity and experience going to this race, it was just a shame that I couldn't capitalise on it.”

Harriet Miller-Brown also describes the World Champs as “an amazing event to be part of.” Her highlight was the slalom event: “The slalom went well, with me qualifying for a second run (as only the top 60 get one this was a goal) and the second run was going well up until the end where I made a mistake and lost all my speed. However, I still ended up 54th. I loved the experience and it has given me a taste of something I want to be part of again.”

“The true champions won and we gained massively from the experience in terms of what we need to do to again be competitive at this level as we were in the 90s,” says Coach Nils Coberger. “All the athletes and coaches represented their country and Snow Sports New Zealand proudly and professionally. The event has inspired everyone to work harder and better to achieve their individual end goals." 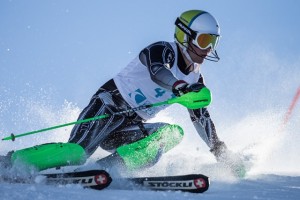