Schladming, Austria (10 February 2013) – The New Zealand Ski Racing Team are currently testing their skills against the world’s best and in front of crowds of up to 30,000 spectators at the 42nd FIS Alpine World Ski Championships in Schladming, Austria.

The highlight of the northern hemisphere alpine skiing season, the World Championships run from 4th to 17th February 2013 and are attended by athletes from 72 different nations.

Although the young New Zealand team is not expected to achieve podium results, it is nevertheless, an opportunity for them to gain valuable experience competing alongside the best in the business.

“As most of the athletes are very young, we are not putting any pressure on them to perform to any unachievable heights,” explains Ian Mclean, Snow Sports NZ’s Alpine and Cross Country Manager.

“The athletes should use the World Championships as a chance to see how the top skiers in the world work. I am hopeful that our athletes will benefit from this fantastic experience and when they return to New Zealand they will be able to share with our junior athletes what it is like to participate at such an event.

The team does indeed appear to be enjoying the experience so far. Nick Prebble (Christchurch) recounts their first impressions: “We arrived in Schladming to a vibrant town and we joined a packed stadium for the opening ceremony. It was a great show and we were all buzzing to get out on snow the following day to see what challenges would face us.”

Indeed, the challenges have been many as Prebble goes on to explain: “That night we spent hours trying to file down the edges on our skis so they would comply with the maximum width regulations. The amount of rules and regulations we had to fulfil was a new experience for us. From ski heights and widths right down to the minor issues of logos on helmets and goggle straps being too big. It was endless!”

The FIS Alpine World Ski Championships opened with women's Super G race on Tuesday 5 February and Piera Hudson (Hawke’s Bay) the sole New Zealand representative. The race start was initially delayed due to fog which then cleared and allowed the first half of the field to start. Unfortunately the fog came back in again and the call was made to cancel the race with Hudson one of the last 25 girls who were unable to start.

Having skied a career best GS result (42.14) and a second best result in Super G (56.03) earlier on in the season, Hudson was understandably disappointed at being denied the opportunity to compete on the World Champs course. However, she remains positive for the future: “It's all going really well at this point in the season and if the weather will just be more on my side in the future, I'm sure there will be more results to come!”

The women’s Super G was won by Tina Maze of Slovenia, with Lara Gut of Switzerland taking silver and Julia Mancuso of the USA, the bronze.

The following day it was the men’s turn to take on the Super G course with Ben Griffin (Ohakune), Nick and Jamie Prebble (Christchurch) and Willis Feasey (Twizel) flying the Kiwi flag. Starting in bib 45 Ben Griffin was the top performer on the day.

“The Super-G race at worlds had me really fired up,” Griffin enthused. “I was feeling calm, ready and confident. Having watched most of the guys run it on the T.V. in the lodge, I was keen to rip into it.

“The top section went well, working into the course but perhaps a little bit passively. I had a big mistake in the middle which led to three poor turns and a big drop in speed for a crucial basketball turn followed by a traverse. I got it back together for the next section but then missed my timing on the wire bump turn at the bottom, going wide and losing more time.”

"It’s hard to say what could, should or would have been the result, but going into the run I was certain I could charge for a top 30. In the end I was 39th.”

Nick Prebble started in bib 53, finishing a respectable 42nd. Despite declaring himself “not super stoked” with his skiing Prebble nevertheless described it as “an awesome day”.

“Dropping into the final pitch with the crowd looming in the horizon was definitely the most amazing experience in my life. Your legs were starting to scream at you by this stage, the toughest section of the course was approaching and the snow was super slick and bumpy. You just had to grit your teeth and fight to the finish line.”

Nick’s brother, Jamie Prebble, who has had only limited time on Super G skis, was simply “happy to get down” and placed 63rd.

Willis Feasey recorded a DNF and explains how his race panned out: “The Super G started off slow, but just when I started to get into the groove of things I accidentally shifted my weight a little too far towards the inside; because there was no pressure on my outside ski I hit a bump and my ski unfortunately popped off.”

The men’s Super G was won by Ted Ligety (USA) who took a two tenths of a second win over France's Gautier De Tessieres with Aksel Lund Svindal of Norway claiming bronze.

Feasey was the only New Zealand skier in Saturday’s Downhill event and was delighted to bring home a more positive finish despite a particularly rugged course and overcast conditions.

“It was a long course (about 2 minutes 5 seconds),” Feasey explains, “and the hardest part of the course was the final pitch, my legs were burning by then and course set got very difficult.  I managed to just hold on and come 38th which was my goal for this event.”

In other news, Adam Barwood has continued his run of solid results competing in the Slalom at Piesendorf in Austria on 5 and 6 February. Barwood achieved 11th place from starting bib of 33 and 15th place from bib 35.

Barwood will now join his team mates in Schladming for the men’s GS on Thursday 14 February. Piera Hudson and Harriet Miller-Brown (Queenstown) will compete in the women’s race the same day. 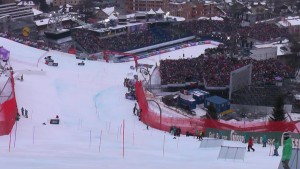