I have just wrapped up an intense week at the World Championships in Italy.  I competed in five races over the span of seven days so naturally the legs are feeling a little fatigued.

The World Champs have been a little up and down; while I am satisfied with how I performed, I’m not quite ready to stop racing for the season and still feel as if I have more to give.  However, university has begun and I cannot afford to miss too much class.

The World Championships started with the 10km qualification race.  This race is for those who have greater than 90 FIS points.  Unfortunately with 93 FIS points I had to race.  I was seeded second in the field of 70 or so starts so I was hoping for a podium finish.

10km has never been my strongest distance, and I knew I had to start fast.  I did exactly that but even so I found myself outside the top 10 at the first time check.  All I could do was to maintain my starting pace; I simply didn’t feel as if I could ski any faster.  Luckily by the 7km stage I had picked a few positions and found myself fighting for the podium.  It was tight, with about five people separated by five seconds.  I sprinted as hard as I could for the line and crossed in fifth.  I was exhausted, it was all I could give and certainly one of the hardest races I had had this season.  I was happy to qualify and move onto the 15km but disappointed I had missed out on the podium by four seconds.

There wasn’t much time to dwell on this as the next day was the classic sprint qualifier.  I woke up with very stiff legs and knew it was going to be a tough day as it was snowing quite a lot and the temperature was hovering around 0deg.  The absolute worst conditions for a classic race! I found myself mid way through the sprint qualifier, struggling to kick my skis up the steep hills found on the course.  I was extremely disappointed when the skier who started 15sec behind me caught and passed me and my 96th placing did little to raise my spirits.  Luckily at the World Champs there is little time to dwell on results.  There was only one day of rest/testing before the 30km Skiathlon.

I was particularly looking forward to this race.  I had performed well at the 30km in Canmore and was hoping for a repeat effort.  However, it was not to be my day.  I got a bit tangled up in the start and ended up having one of my poles broken.  Luckily I got a replacement fairly quickly from one of the Finnish coaches on course but I was at the back and had a lot of fighting to do if I wanted to meet my expectations.

I skied the classical portion well, picking up a lot of places and ending up coming into transition right behind my Australian rival Callum Watson.  This was exactly the way the race went down in Canmore so I was hopeful we would be able to work our way up the field.  This is exactly what we did; however, unfortunately everyone we passed managed to grab onto us and we ended up pulling a freight train of about 10 skiers between us.

No one else in the group was willing to work except Callum and I.  This meant that I used a little too much energy and was struggling with leg cramps in the last 2km.  The pack of 10 or so who I had been pulling ended up passing and out sprinting me into the finish.  This meant that I finished in 68th position, disappointing but the 10.4% behind the winner, world cup overall leader Dario Colonga from Switzerland, wasn’t too bad.

The next day Nils Koons and I lined up in the all-important Team Sprint event.  I was pretty nervous going into this, as I’m not really know for my sprinting and was the starter for the team.  I was hoping that the pack wouldn’t simply explode out of the blocks and pull away from me on the first lap.  Luckily this didn’t happen, I was able to hold on, just, and tag off to Nils at the back of the pack.

The team sprint consists of six laps of the sprint course, with the two team members tagging off to each other after each leg.  It’s like the hardest set of intervals you can imagine.  By the second rotation I found myself in a battle with the team from Denmark and, naturally, our rivals Australia.  It appeared that the heroic efforts by Australia’s Phillip Bellingham on the first lap were starting to hurt him and I was able to take out a bit of a lead at the exchange.  My third leg was simply about holding good form and trying to put Nils in a position to take down the Danish skier who was a few metres ahead.  Luckily Nils was able to do exactly this and we finished in 21st ahead of Commonwealth rivals Australia and Great Britain as well as several other European teams.

Luckily, as my legs were pretty much shot at this point, we had two days off before the 15km individual.  I was really looking forward to this race, the 15km distance suits me as does the individual start format.  It was a tough day with temperatures well above 0degC.  This made the snow wet and slow but luckily our wax technician Alexei was able to pull off some magic with the help of the Polish team and we had great skis.  I started with bib number seven and crossed the line in first place.  This meant I got to sit in the coveted leader’s chair if only for 5mins until the next faster racer came in.

I ended up finishing in 64th position, not quite the top 50 I was hoping for but still in good company. Only 40sec behind the strong Russian skier Maxim Vylegzhanin who is fifth in the overall world cup competition this year.

I went into World Champs with the goal of starting every race, though was especially focused on the 30km skiathlon and 15km individual start skate race.  I figured I’d see how my body responded to the heavy race load and adjust if necessary.  I ended up racing all five possible races, though the distance (~100km) began to catch up with me as the championships were winding down.  The last race was a bit of a struggle, though you never do an easy 50km.

Over all, I’m quite happy with the way the races went.  Our skis were running consistently well, despite the tricky conditions, and most importantly, we bested the Aussies in every race.  A quick rundown of each race in chronological order is below.

Classic Sprint – I’d sort of planned on using this race as a warm up for the rest of the championships.  I haven’t traditionally been very strong in sprint races, though for using the race as a warm up of sorts it went quite well.  I ended up placing 61st out of roughly 130 starters, though most importantly it was a good indicator for the distance races later in the week.

30km Skiathlon – This was probably the race I was most nervous for. It has been my experience that this tends to be the hardest of race formats with a high pace throughout.  The classic portion went well, my skis were definitely geared more towards the uphills, which I think saved my arms for the skate portion.  I managed to pick up a few spots before the end of the skate section and was pleased with both the result and the way I had skied the race.

Team Sprint – The team sprint is one of my favorite events at the top level.  It gives you the chance to rub shoulders with the best nations and just go out and ski as hard as you can.  We wound up 21st out of 30 teams and beat a number of nations with far more developed ski programs than New Zealand.  I was a little worried that the previous day’s race would leave us pretty beat up but ended up feeling quite strong and managed to have the fastest split on one of the laps early in our semifinal.

15km Individual Skate - This was the other race along with the skiathlon that I was focusing on.  It’s traditionally been one of my stronger events and the way the seeding worked I was able to start with some of the top guys on either side of me.  I ended up going out a little too hard and was definitely hurting for the last couple of kilometres, though all told it was again a good race.

50km Classic – This was the last of race of the championships and it promised to be a brutal race with slushy conditions, hot temperatures, and the fatigue of the last week catching up with me.  It didn’t disappoint and I wound up struggling through parts, though our tech really nailed the skis and I went through four pairs over the course of the race.  By the end I was absolutely spent though glad to have done the race.

The World Championships in Val Di Fiemme were a great experience for me. I am mainly a biathlete, traveling alone on the world cup circuit, so it was very exciting to have been able to team up with Nils, Andy and Alexei to have a real team feeling.

I had two races at these World Champs: - the 5km qualifier race and the 15km skiathlon (7.5 km classic/ 7.5 km skate). The qualifier was the first race, and let me tell you, this course was pretty challenging! It definitely made you work the whole way- both the ups and the downs. I finished 13th in the end, and as I was an early starter, I was able to sit on the leader chair for a while!

The skiathlon was a little bit scary for me as I am not typically a classic style racer. In the end I felt amazing and was very pleased with my finish.

I was very happy to have been given the opportunity to start at these World Championships, and now I am ever more motivated to do more strictly XC races as well as biathlon. 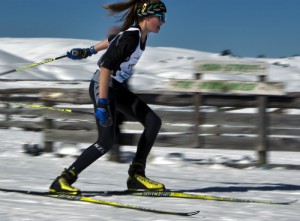