Among the juniors, Olivia Jones matched brother Louis’ victory in the Under-18s from Fiona Murray. Hana Jones – Joanna’s 7-year-old daughter and Mary Lee’s granddaughter – kept the family tradition alive by taking the Under-12 girl’s title from her school friend Georgina Titterton for whom this was the very first time on cross-country skis.

Bri Paulsen, studying for one semester at the University of Otago, was especially thrilled to receive her medal from Jessie Diggins as they are both from the same state of Minnesota.

In the women’s 10km race, yesterday’s 1-2 was reversed as 2013 Team Sprint World Champion Jessie Diggins took the win ahead of Ida Sargent with Sophie Caldwell repeating her third place from the Sprint Classic race.

Jessie Diggins said it was a beautiful day to race.

“All the volunteers and organisers here at Snow Farm did an amazing job. The course was perfectly groomed and well marked. There was a flatter section then a big climb so you had to figure out your pacing which was great practice as our competition season is just starting,” she said.

“Normally striding on a really steep hill isn’t a particular strength of mine so it was nice to embrace the climb and say ‘OK this is where I’m going to try to make a move’ and try to make it stick. It was fun to just try something a little out of my normal range!”

Racing concludes tomorrow (Sunday) with the Freestyle Interval Start. FIS Cross-Country Skiing ANC races will begin at 9.30am over a 5km course for women and 10km for men. New Zealand National Championships for all age groups in the same event will follow at 12.00pm over shorter distances but the same course.

Entry for the national championships is at Snow Farm on the morning of the race. Anyone wanting more information on age group categories and entry fees should visit the Snow Farm website. 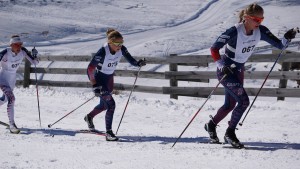