CGK Lands Run of the Day

Carlos Garcia Knight topped qualifying rounds of the men’s Snowboard Big Air today, scoring an impressive 97.5 points from a possible 100 on his second of two runs.

On run one he landed a switch back 16 indy and even with a slight hand touch on the snow came away with a score of 88.75, signalling that he was a finals contender if he could improve the execution.

Sitting in fifth place after his first jump and needing to finish within the top six to earn a spot in the finals, Carlos went for the same trick, gained some massive amplitude and stomped a flawless landing.

It was a personal best performance and the first time he had landed the trick in competition having first learned to do it during Spring training camp at his home resort of Cardrona Alpine resort in October 2017 and successfully landed it in training at the 2018 X Games. He explains:

"It’s not that common and that’s what I came in to this competition thinking – if I can come through and do something that isn’t as common, put my own flair on it and make it my own then hopefully it’ll do well, and it did.

"I knew coming here I was going to have to so something big. The guys are riding so well, this is the best contest I’ve ever seen. It’s unreal the level of riding right now.

"You want to do well when everyone is riding at their best." 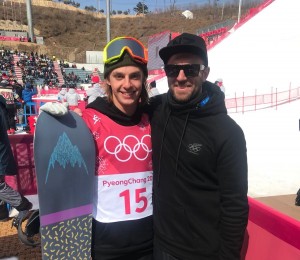