There were mixed emotions for freeski halfpipe competitors Janina Kuzma and Britt Hawes after missing the top-12 cut off for their finals competition today, finishing 16th and 21st respectively.

“My expectations were set really high today,” says Janina. “I really wanted to make the final. It’s disappointing when I don’t make finals because I’m a very competitive person.”

Janina’s competition was impacted by a crash during training which caused discomfort in her knee.

“I was not very confident out there today. I had a crash on my third training run and I had to pull out of the rest of training and re-assess what was going on with my knee. Our medical team came and checked it and I had a break before the comp and decided it was good to go.

“Coming back from that mentally was good and I’m so thankful I could out down one kind of clean run. I just had to do what I could do with a sore knee.”

Britt Hawes felt some nerves about making her Olympic debut but was able to land her runs.

“On the first run I was nervous but I was just trying to take it all in and enjoy the experience.

“That run was the best I’ve landed under competition pressure. I can’t be disappointed with that.” 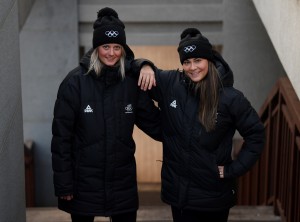