The Mt Olympus Freeride Open held  on Wednesday 14 August saw an amazing turnout of 54 riders from 12 different countries frothing for some special conditions. The competition was organised by the New Zealand Junior Freeride Tour  to keep the freeride pathway growing and to further develop the freeride scene in NZ.

With the weather forecast  rapidly changing the call was made for Tuesday to be an inspection day and competition to run on Wednesday.  For many riders this was the first visual inspection, so it was a great learning experience.  The venue was well suited to novice competitors, being very easy to see into the face during the hike and with a friendly start zone where you could see all takeoffs and most lines.

For many competitors it was also the first time sampling the nut cracker rope tows which  provided challenges aplenty and great entertainment!

As Mt Olympus is having an epic winter, those who tackled the hike ascents were rewarded with million dollar views of the surrounding mountains and brilliant turns below. The safety crew did a brilliant job supplying a great venue.

Wednesday morning was clear and calm. Competitors had a last 45 minute visual inspection and then started to trickle up the boot pack with starters Sam Smoothy and Neil Williman in place for pep talks and rider support.

There was 60cm of fresh snow in the face from the last storm cycles, the northern aspects had a slight sun affect on it but in the words of event organiser Dion Newport, "she was banger and ready to rumble!"

The first category of the day was men’s snowboard. Scott Anfang (USA) came out of the gate hot, with a big air at the top, clean riding, a small feature at the bottom and slashing the windlips earning him third place.

In second place was Rhys Iggulden (NZL). It was hard to believe  this was his first ever event as Rhys took a huge air off the top, shredded the face and put down a epic run forcing the judges to deliberate hard before putting him into second place.  Conrad Niven stole the show, taking the top spot with an extremely aggressive run with a huge line and stomped the biggest air on the boards for the day!

The female snowboarders were next. Christina Bruno from the USA came in 3rd and Genevieve King(NZL) finished 2nd place but no one could come close to Nuria Castan Baron(ESP) who lay down an extremely good run with clean snowboarding and attacking the venue in the great conditions.

The ski women stepped up next. Carmen Geyr (ITA) took the 3rd place spot on the podium, Elise Boeuf (FRA) showed her skills with some great features taking 2nd but Jessica Hotter(NZL) took the title with a fast and aggressive run. Jess stomped most of her landings but did a classic Kiwi move of punch frontflipping her last air. Even with this mistake she landed herself on the top of the podium taking home a pair of Volkl Aura.

The final category was the Men Skiers. There were so many banging runs but the MFC crew dominated the podium with all spots filled by crew members. Last year’s winner Jamesa Hampton (NZL) sneaked onto the podium again in 3rd place, Ben Hume (NZL) came out hot and slayed a line taking out 2nd place. Hank “the tank” Bilous (NZL) carried on his roll from winning The North Face Frontier and took the title with a huge line choice and super clean run making the judges stand out of their seats screaming at his run!

"It was a huge pleasure to run the Mt Olympus Freeride Open and an eye opening experience to see such a range of riders wanting to attend this event and grow the sport of freeriding," says Newport.

"Mount Olympus has proved to be a fantastic resort for venue options and their safety crew outdid themselves.  We were stoked with the  support for the 2017 edition and we look forward to putting on the event next year bigger and better again!

"A massive shout out to Make Ape for supplying two snowboards for 1st places in the boarding categories, Volkl provided 2 pairs of skis for the top place skiers, Mons Royale gave out some beanies and socks for the 2nd & 3rd places. Moa Brewery supplied refreshments for all the crew and riders. " 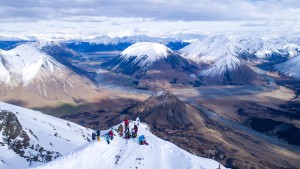