Murphy flew to Canada at the beginning of week having spent the last seven weeks at home in New Zealand following the birth of his second child in December.

“I’m stoked, having just stepped off the plane and having had seven weeks off snow, a podium was more than I was expecting. I was hoping for a top five result,” he explains.

“I still didn’t ride exactly how I wanted but it takes a few days to get back into it and it’s reassuring to know I’m still on the pace. I’m really grateful to have the support of my wife Aleisha in helping me balance family alongside my professional goals.”

The NZ Paralympian has joined 40 riders from 11 other countries in the Canadian resort for snowboard-cross and the new discipline of banked slalom. His competitors include all three Sochi 2014 men's medallists, the USA's Evan Strong, Mike Shea and Keith Gabel. It was the first time the New Zealander had competed in the new format of snowboard-cross head-to-head having missed the debut of this format at the World Cup in Aspen, USA, on Tuesday (13 January).

“The head-to-head racing is more exciting and makes you push yourself harder. I wasn’t too worried about missing the Aspen race in terms of the new format because I’ve raced a few FIS (International Ski Federation) races against able-bodied competitors so I’m familiar with the format. My main concern was having been off snow for a while.”

Any concerns about lack of time of snow were soon put aside as Murphy found the pace he needed, qualifying third fastest in the time trial seeding rounds before moving through to heats as one of the eight fastest competitors.

“I had good pace in the time trials and then I pushed out and won my first heat. In the semi-final the racing was really tight at the top of the course. Mike Shea pulled ahead for the lead but I managed to catch him at the finish line and finished only a board length behind him for second and a place in the small final.”

Murphy then faced Sochi bronze medallist Keith Gable but kept his eyes on the prize and once again set the pace straight out of the gates.

“I had a good start, made a move on the first berm and then stayed in front all the way to the finish.”

Competition continues with banked slalom on Monday (19 January). Results will be available athttp://www.paralympic.org/snowboard/calendar

Murphy’s main focus for the season is the 2015 IPC Para-Snowboard World Championships in La Molina, Spain from 23-28 February. 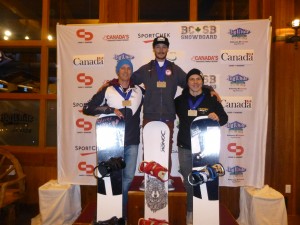