“It was a really challenging weekend,” explains Chief of Race, Jono Eaton. With fresh snow falling overnight “it took a huge effort from everyone to get the race away on Saturday.” Coaches, officials and mountain staff spent three hours with shovels and rakes clearing the side of the course while competitors worked in teams of four and five slipping the course.

“It would have been very easy to simply cancel the race but everyone worked together to make it work. It was definitely something to proud of and inspired by and the result was a great race run in safe conditions,” says Eaton.

With another 15-20 cm snow overnight it was too soft to get the South Island NZYS Giant Slalom away on the Sunday and the event was cancelled. However, knowing that the younger competitors were eager for their turn on course the Race Organising Committee once again persevered and with support from technical delegate Dave Grogan (TD), referee Igor Stros and Team Hutt Coach Chris Mosaed a call was made to run the Junior Interfield Kombi.

Racing got underway at 12.50 with Olympic medallist Annelise Coberger forerunning the course. By the time run one was complete visibility had deteriorated, the course had cut up and the call was made to decide results on a single run. 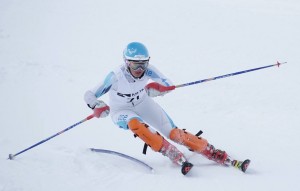