The 2015 The North Face® Freeski Open of New Zealand wrapped up in spectacular style today with the three star Freeride World Qualifier ski and snowboard Big Mountain Finals. The steep and exposed terrain of the Alta Chutes at Queenstown’s The Remarkables Ski Area once again provided the perfect venue for what the judges described as some “mind blowing” action.

Following the high standard of competition in yesterday’s Qualifiers the expectation was for the bar to be pushed even higher today, a layer of fresh snow overnight helping to seal the deal.

Hank Bilous, who placed second in the 2014 event and was pre-qualified to today’s finals sums up the vibe: “I watched Qualifiers and I knew it would be go all out or go home, especially with the new snow.”

With only one chance to earn a score, competitors fought hard to find just the right combination of line choice, air & style, fluidity, control and technique, wrapped up with points for overall impression.

Female snowboarders were the first to take to tackle the terrain, struggling a little with flat light and patches of ice lurking beneath the fresh powder. Maria Kuzma won the category, keeping her run controlled and fluid despite not taking quite the line she had planned.

“There was great snow up top but then I found an icy section and had to check my speed and change my line.”

Canadian Kai White was the winner of the men’s snowboard category, taking a different line from other riders out to the left of the venue and finishing his run with a big double rock drop known as the ‘waterfall’ at the bottom of the course. “It’s not often there’s enough snow in there and it’s especially hard on a snowboard,” explains Head Judge Dion Newport. “It was incredible to watch a snowboarder tackle it and nail it.”

“I’m feeling great,” said Kai afterward his run. “I’ve been researching the venue for days and that line really grabbed my attention as soon as I saw it. The snow was feeling great so I really went for it.”

“I opted to go where the good snow was, working on getting a couple of good airs at the top and skiing out fast to the finish.”

The men’s ski category provided the day’s finale, each rider looking to push the standard to the next level and make the judging call ever harder.

“History has shown the level of skiing at the Freeski Open of NZ is one of highest on the  Freeride World Qualifier tour. These skiers are going to be a force to be reckoned with for many years to come,” says Dion Newport.

Sébastien Varlet of France, a regular on the Finals start list at the Freeski Open of NZ with his strong skiing technique, decided today was his day to step up for the win. Putting everything on the line, he simply went bigger and faster than anyone else, signing off with a huge air off the bottom rock feature.

“I’ve wanted to do that for the last two years but the conditions haven’t been good enough, today was the perfect day to do it,” he explains.

Second place finisher Sam Lee (NZ) impressed the judges by skiing some of the most technical sections of the venue including the challenging waterfall drop. “I wanted to do something I hadn’t done before, get into some new terrain and take a creative approach. I’m stoked with how it went.”

Third place went to Hank Bilous, a young Kiwi skier whose fearless approach has already seen him earn multiple podium placings at freeride events and last year earned him a wildcard to compete on the 2015 Junior Freeride World Tour in Europe.

Hank took a stylish approach to his run, incorporating two 360 degree rotations off the rock features at the top of the course, milking the fresh powder as he made his way down the venue and finishing off with a big air at the bottom.

Blake Marshall, yesterday’s top qualifier narrowly missed the podium, finishing in fourth but impressing the judges with his creativity and unique style. “I wanted to keep it styley, go as big as I could on the jump and try to hit features no one else had hit.”

The North Face® Freeski Open of New Zealand is also the only event to stage Slopestyle, Halfpipe and Big Mountain competitions in one. The Slopestyle and Halfpipe disciplines are sanctioned by the Association of Freeskiing Professionals and were staged at Cardrona Alpine Resort in early August.

Image: Hank Bilous competing in the 2015 The North Face® Freeski Open of New Zealand Big Mountain at The Remarkables, 4 September 2015 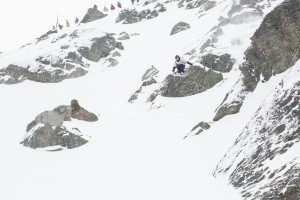