As the sport’s big names came crashing down one after the after, the young Kiwi – who was initially only invited to the competition as an alternate and gained his spot a few days ago when the USA’s Kyle Smaine was sidelined by injury – not only put a run to his feet but landed on the podium.

“I just can’t really fathom it right now,” he said moments after the competition. “It’s unbelievable!

“I was excited to get a chance to compete but was really sad to hear about Kyle’s injury and I wish him all the best. My goal was just to put a run down in the X Games environment which is unlike anything I’ve experienced before.”

Following three days of training in snowy conditions the pipe had turned icy and the field of eleven competitors struggled to land their tricks. After the first of two runs only one competitor, Canada’s Noah Bowman, had been able to land a full run. His first run score of 71 points would eventually see him finish in the bronze medal spot.

Miguel Porteous crashed on one of his first hits on run one. “I wasn’t really in the right head space to start with,” he explains. “I was still feeling a little bit of disbelief about being here and it was cold. After the first run I got back to the top of the pipe and just tried to relax. I danced around a bit and listened to a song I like before I dropped in.”

The strategy worked and Miguel executed a technical run, spinning both ways down the pipe incorporating three double flips. His personal highlight was the left double 1260 on the second to last hit.

“It’s a trick I’ve had a bit of difficulty with but I’ve been working hard on it at a recent Snow Sports NZ training camp in Calgary.”

Jossi Wells competed in men's slopestyle on Sunday and finished in ninth place. 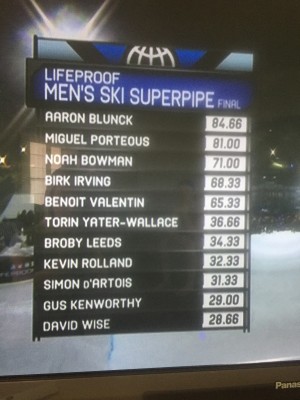