Porteous came in to the 10-man final having qualified second in his heat and looked to be on track for a podium finish from the very first hit. His first run - comprising back to back double 1260s, left 1080, switch left alley oop, double 900, switch right alley oop 540 – scored a 93.75, the judges rewarding for good amplitude and trick variety, putting the Kiwi to the top of the leader board.

Double Olympic gold medallist David Wise (USA) laid down a strong challenge but his top score of 90.50 put him just behind the Kiwi. Top qualifier Aaron Blunck (USA) recovered from a first run crash to leapfrog in to first place with a score of 96.25 on his second lap through the 22-foot high, 68-foot wide superpipe.

Knowing that he still had the opportunity to lift his score Porteous attempted to add another double at the end of his third run, couldn’t quite pull it off but was happy enough to settle for a silver medal at the season-opener.

“I’m pretty over the moon with how today went,” he said. “I had a really great training and then managed to put my first run down with a 93 which I was really stoked to be able to do. I can’t wait to add a few more tricks in there and I’m excited for Dew Tour next week.”

New Zealand’s Olympic bronze medallist, and youngest of the Porteous brothers, Nico, finished in fourth place with a top score of 88.00 on his first run, landing the tricks he’d planned - left 10 switch right 9, switch left double 10, right dub 12, left dub 12 -but losing points for a low landing on his switch left dub 10. He attempted a 1440 on his second run but missed the grab and had to settle for a 1260, and no improvement in his score.

Beau-James Wells suffered a crash in practice and was unable to start today’s finals. He is currently undergoing medical assessment.

Nico and Miguel Porteous will next compete at the Dew Tour 13-16 December in Breckenridge, Colorado before travelling to China to compete at the next round of World Cups alongside snowboarders Zoi Sadowski-Synnott, Christy Prior, Tiarn Collins and Carlos Garcia Knight. 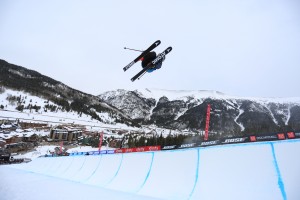