Hakuba, Japan (19 January 2019) – NZ athletes have made a solid start to the Freeride World Tour season with Maria Kuzma finishing just off the podium in fourth place in women’s snowboard and Craig Murray fifth in the men’s ski category at the first stop in Hakuba, Japan today.

Seeking out the steep technical terrain at the top of the course, Maria slashed solid turns all the way to finishing line, while Craig stomped the biggest trick of the day at the start of his run with a cork 7 tail, also looking relaxed on course and enjoying the deep powder and calm conditions.

"My run was super simple, I just wanted the first comp to run smoothly and find my feet," said Maria. "Now my feet are itching for the next competition!"

It is Craig’s second season on tour, following his debut last year, while Maria returns to the FWT after a seven-year break.

"The run went well for me," said Craig. "I was happy to stay on my feet and get a top-five result for the first event of the world tour. My good friend Hank Bilous was meant to be here and couldn't make it due to a illness so I really wanted to land something he would be stoked on. Also shout out to fellow Kiwi Sam Lee who was meant to be here also but recently broke his lag badly.

"We got really lucky with fresh snow and good light on the mountain today. I was really inspired by the skiers and snowboarders before me and tried the first 720 in a few years on the tour and happy to put it to my feet and achieve a personal goal. I'm excited to be back on the world tour this year and looking forward to building on this result for the next four stops." 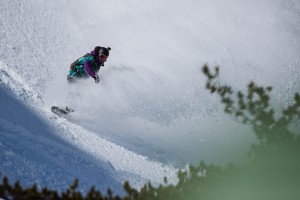