Valmalenco, Italy (26 March 2014) - The New Zealand solidified its 2014 Junior World Championships campaign in excellent fashion today with a podium for 15 year-old Lyon Farrell who finished second in Men’s Snowboard Halfpipe.  Lyon was rewarded by the judges for boosting the biggest first-hit straight air of the event and followed this up with a well-executed front 7 to cab 7 to front 5 to back 5 combo finishing with a styley frontside air.

“I had food poisoning before the practice day, so was happy to be feeling 100% today for finals," explained Lyon.  "Everyone rode really well, the vibe at the top of the pipe was awesome and it feels great to get on the podium.  I was focussing on a clean run and I’m just blown away to have placed second."

Asked about what the future has in store and Lyon said, “I want to do really well in World Cups and World Snowboard Tour events in the future and it would be great to be able to qualify for the PyeongChang Winter Olympics in 2018.”

Slopestyle specialists Carlos Garcia-Knight and JJ Rayward demonstrated strong fundamental skills, performing well in their secondary discipline.  Carlos made it through qualifying and semi-finals and landed his first 720 in halfpipe competition to place 12th.  JJ Rayward (also a slopestyle specialist) landed a personal best run in semi-finals getting tantalisingly close to making the cut for finals finishing in 13th place.

Snowboard Coach Sean Thompson was very happy with the team performance throughout the training and competition days:

“It was awesome to see the whole team step up to the plate in the halfpipe.  We had some challenges to deal with, but the team remained positive, kept their composure and focussed on what they could control.  This led to great individual performances and produced the results!”

The freeskiers have arrived in town and it is their turn to take on the Halfpipe while the snowboarders shift their attention to Slopestyle this weekend. 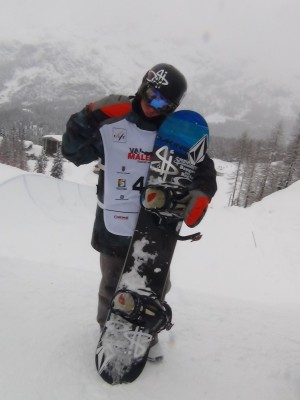