Lyndon placed fifth in his heat, competing against a supremely strong field which included Olympic hopefuls from 29 countries. Freeski halfpipe will be included on the Olympic programme for the first time in 2014 and the Copper Mountain World Cup is one of the last opportunities for athletes to qualify for the Games.

Each country is allocated a maximum of four spots for each gender and within each discipline at the Winter Olympic Games. While countries like the US, Canada and France may have up to a dozen athletes who have the potential to fill these spots in the freeski halfpipe discipline, only the top four from each country will be selected for Sochi. The field competing in today’s halfpipe competition was therefore arguably stronger than the Olympic field in terms of participants.

“Lyndon had a fantastic day,” explained Snow Sports NZ Head Park and Pipe Coach, Tom Willmott. “He took a really aggressive approach to the day and came out guns blazing in his first run with a new run, the most difficult run he’s ever landed in competition before.”

Only the top five scores from each of two heats plus the next two highest scores overall would make the cut for finals qualification. A few missed grabs in the first run meant the pressure was on to improve his first score of 69.80. “I knew I had to step it up,” commented Lyndon after the event.

Keeping his calm, Lyndon stuck to his guns, cleaned up the run, went bigger, faster and better in the second run and earned the extra 10 points needed to take him through to finals.

Underlining the inherently challenging nature of the sport of freeskiing, other athletes expected to dominate the field found themselves out of contention in today’s competition including men's halfpipe world champion David Wise who crashed on his second run.

The FIS World Cup continues until 22 December. How the competition results impact the New Zealand team’s Olympic qualifying campaign will depend on final results over the next two days. Following the Copper Mountain event, the team has the opportunity to compete in two more World Cups before final selection for the Sochi Games is made in mid-January. The next World Cup will take place at Northstar in the USA from 7 – 12 January. 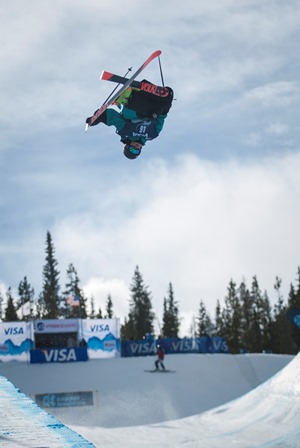