Currently ranked sixth in the world in men’s Super-G in the standing class and a three-time Paralympian, Adam Hall posted some of the day’s fastest split times in his class, challenging the world top three for the podium before ultimately suffering the disappointment of a DNF. Sit-skier Corey Peters made it safely through his run to finish sixth in his first Paralympic Games.

The sport of para-alpine skiing employs a classification system to ensure fair competition between alpine skiers with different types of disabilities. The classifications are grouped into three general disability types: standing, visually impaired and sitting. A factoring system allows the three classification groupings to compete fairly against each other in the same race despite different functional skiing levels and medical issues.

Super-G is regarded as a speed event, in contrast to the technical events giant slalom and slalom. Super-G has few turns and the gates are spaced widely apart. Racers aim to take the fastest line with a combination of speed and precise turning. In the Super-G racers have only one run to post their fastest time.

Today’s race saw skiers challenged not only by a tight and technical course but soft snow conditions slowing their speed.

Adam was the 15th racer to start in the standing class. All went well on the top section with the Kiwi setting a good pace and the split times putting him in contention for a podium spot. Hitting the rutted middle section of the course he found himself bounced off his race line and unable to hold on, losing his balance and posting a DNF.

“I felt really confident, really strong. I felt really happy about how I was skiing. Unfortunately pretty close to the finish line I came out and wasn’t able to finish.

“It was a little bit bumpy through that section and it was quite a cranker of a turn going in but no excuses, it’s the same for everybody.

“This sets us up well for the super combined. I felt really good on the hill, I was really happy with how my skiing was going but obviously I need to get across the finish line to get the results we’re after.

“Today was obviously disappointing but we’ll take that forward and know that we’re in there, we’ve just got to get across the finish line.”

New Zealand’s Corey Peters finished his day in sixth place in the men’s sitting class. For the first-time Paralympian who is currently ranked 15th in the world for Super-G, the day underlined the value of perseverance.

“No matter what happens, whether you make a mistake or not, just fight to the end,” he commented after the race. “As it’s proven today, half the field has crashed out and I’m sitting in sixth. If you fight to the end you never know what could happen.”

Corey made a mistake mid-way through his run applying a little too much pressure on his turn, causing the bucket seat to touch the snow and slow him down. Nevertheless, he was pleased with the overall result on a challenging course.

“It went well, I’m obviously quite proud to be able to finish. It was definitely a rodeo ride.  Just to survive that course and coming down in one piece is very pleasing. There were a couple of mistakes I’m not very happy about but that’s ski racing.”

Racing continues for the New Zealand team on Tuesday with Adam Hall and Corey Peters competing in the Super-Combined.

The Sochi 2014 Winter Paralympic Games continue until 16 March with 45 teams and 547 athletes competing. With a record number of athletes and countries, broadcasters and press, these are the biggest Paralympic Winter Games ever held.

The New Zealand team’s events will be livestreamed on attitudelive.com/paralympics.

TVNZ will be the free-to-air broadcast partner providing news, highlight packages and OnDemand content for the duration of the Sochi Games. 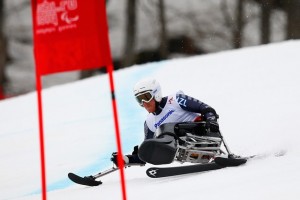