Kiwis on the Podium at Freeride World Qualifier in Verbier

Blue skies and fresh snow complimented the second 2* competition of the Freeride World Qualifier series of the season on the Grand Tsai face of Bruson Resort. Verbier Freeride Week showcases top athletes from across the world as they earn points to compete on the Freeride World Tour. The highest scoring athletes earned a competition place in the 3* taking place in Verbier.

The name of the game for the Men Ski division was freestyle. Max Vaquin (SUI) absolutely claimed the first place podium by throwing a front flip into the venue to front flip to backflip off the money booter. New Zealand skier, Hank Bilous (NZL), earned second place on his first year out of the junior tour by executing a left 360 and a left 720. Rounding out the top three was Sam Lee (NZL) who impressed the judges with a unique technical line.

The Ski Women charged especially hard while incorporating more tricks. Sanna Mona (SWE) was rewarded by the judges for her five jumps at full speed and full commitment and control. Earning second place was Juliette Willmann (FRA) skiing especially fast with clean jumps followed by Amy David (USA) who added a japan grab to her jump.

Recognized as one of the premier big mountain resorts in the world, Verbier features interesting natural terrain and is renowned as an ideal freeride competition venue. In addition to the freeride competitions, Verbier Freeride also hosts entertainment for participants including ski and snowboard tests, live music, and parties. 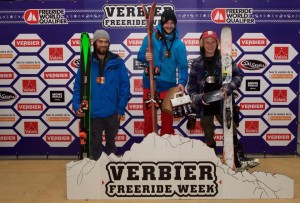