Kiwis off to a Good Start at Junior Worlds

Valmalenco, Italy (25 March 2014) - The FIS World Junior Freeski & Snowboard Championships are underway in Valmalenco, Italy with the New Zealand contingent off to a strong start. Three Kiwis were amongst 45 competitors in the men's snowboard halfpipe qualifiers.

Lyon Farrell was in impressive form, winning his heat to earn direct qualification to the finals. Carlos Knight finished fifth just missing out on the fast route to final. He will battle it out alongside teammate JJ Rayward, who placed seventh in his heat after "having the run of his life", for a place in the finals. 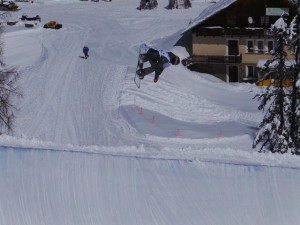