Under pressure to land his second run after a mistake on his first, Garcia Knight (Christchurch) landed back-to-back 1260s for the first time in competition, and in doing so earned his very first World Cup medal.

Enjoying the hometown advantage, Sadowski Synnott (Wanaka) put down a solid run on her first attempt which had her sitting in third place. From there she knew that she could improve her score by tidying up her rail section at the top of the course and opting for the high risk double wildcat trick on the last jump. The plan worked and the Kiwi teenager was able to lift her score from 68.58 to 74.76, holding off Japanese rider Reira Iwabuchi who scored a 70.56 on her second run.

“I’m feeling good, I got the run I wanted,” said Sadowski Synnott.  “I cleaned up the rail section and got the grabs. Finishing with a medal is definitely the cherry on top.”

Olympic Champion Jamie Anderson (USA) claimed the top spot on the women’s podium, the third time in a row she has won gold at the Winter Games NZ. She also chose the occasion to land a new competition trick, stomping a cab double 900 on the last jump of her second run with victory already in hand.

“I’ve wanted to do that for a while, one life you’ve got to go for it,” said Anderson. “I just learned it (the double 900) a couple months ago and I haven’t done it in a contest and it felt really good.”

The women’s silver medal went to Japanese rider Miyabi Onitsuka who was “so surprised but very happy” after rotating more than planned on her last jump but still getting the landing down clean.

Marcus Kleveland (NOR) won gold in the men’s field, scoring highly on both of his two runs with technical tricks spun in multiple directions.

Up against 15 of the world’s best snowboarders, Marcus knew he couldn’t leave much to chance.

“I was pretty much just going all in,’” he said. “I haven’t really been feeling it in practice so I was happy to get the first run down.”

After crashing heavily on his first run and hurting his ankle Canadian Darcy Sharpe was able to take a “mind over matter” approach to his second run, focusing instead on his goal of qualifying for next year’s Olympic Games.

“It’s a very important event leading up to the Olympics so I really had my mind set on landing my run.”

“When she does well I do well, I love that girl!” said Sharpe. “She’s on fire, it only helps me. I’ll never be jealous but I will always be inspired to do as well as her.”

The Audi quattro Winter Games NZ snowboard events are jointly sanctioned by the International Ski Federation (FIS) and the World Snowboard Tour (WST). They provide a valuable opportunity for snowboarders from around the world to earn qualifying points for the Olympic Winter Games which will take place in PyeongChang, South Korea in February 2018. 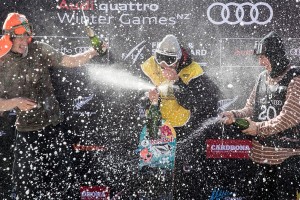