Lake Wanaka (5 August 2012) - In the first international snowboarding event of the New Zealand domestic season, the Kiwis have dominated. Stef Zeestraten won the men’s event and Christy Prior took out the women’s with Shelly Gotlieb (Ohakune) in second place at the 4-Star World Snowboard Tour Billabong Slopestyle.

“Zeestraten had been working hard in the build up to the event, and qualified in first place on day one,” said NZ’s head park and pipe coach, Tom Willmott.  “With a sketch in his first run of semi-finals and sitting outside the top-eight cutoff, the pressure was on, but it ran like water off a duck’s back as Stef rose to the challenge, cementing a great second run to qualify for finals in third place.”

Zeestraten’s winning run was his first of the final, the local favorite registering 79.30 points from the judges. He began with a cab 270 gap to the down rail, followed by a frontside 720, a backside 900, switch backside double cork 1080 and a switch 50-50 on the final feature.

“Good times! It was a fun event, I’m stoked to ride away with the win and stoked to ride with some solid riders, the boys were killing it so I’m happy to be a part of that,” said Zeestraten.

Japanese rider Yukie Kadono was second with a score of 78.2, while 2011 event champion Roope Tonteri from Finland who placed second at the European Open earlier in the year had to settle for third.

Today’s result is a personal best for Open Women’s Division winner, Christy Prior (Auckland).  The 23 year-old only began competing internationally last season and she has already secured a wildcard for the upcoming invite-only 5Star Burton High Fives   which taked place at Snow Park, NZ from 15 to 18 August.

Prior’s run included an air over the petrol tank, a boardslide onto the rail, a frontside rodeo 540, a cab 540, backside 360 and then a method air off the pole to finish. Prior placed on the podium’s top spot ahead of qualifying winner Shelly Gotlieb with Panka Gyarmanti (HUN) in third.

“I had a challenging run in mind for this competition, which I landed in training and pulled off in finals.  I’m very happy with a personal best performance!” said Prior.

In the Junior men’s event Tim Herbert (Wanaka) qualified in first place with strong riding and a back-to-back 720 combination on the big jumps, however in the end it was Tyler Nicholson (CAN) who won in finals with JJ Rayward (Wanaka) in second place and Tim Herbert finishing third.  The Junior Women’s division was decided on Day One with Aussie Alex Fitch placing first ahead of her teammate Biba Turnbull and kiwi Fiona Brunton.

Jody Blatchley, NZ Slopestyle Coach, was very happy with the progressive riding throughout the event and strong performances from the kiwi crew – “what a great start to the competition season!” 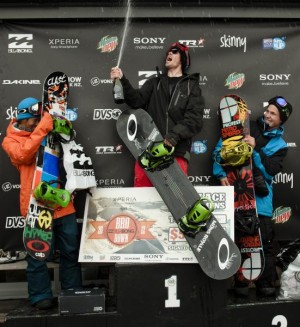